My last session ended pretty early yesterday, so I headed down the Boardwalk for Epcot. I had to renew my Annual Pass, which I did at the International Gateway, and then proceeded to take a left through the UK and Canada, where I stopped for a moment to listen to the blistering bagpipe rock of Off Kilter and snapped the pic of the wine t-shirt for Georgia. I took this route because I wanted my first eating to occur in Mexico. I have to say the chilequiles was awesome. The older I get, the more appreciation I develop for Mexican dishes. The wine was wine; I don’t know much about wine, so I cannot comment intelligently on it, but at least it didn’t clash with the chile sauce. Before eating, I did ride El Rio Del Tiempo (no, I can’t recall the new name, and yes, I will likely continue to call it El Rio Del Tiempo for eternity, thus dating myself every time I speak of it).

Onward then we go to Norway, where there was an Ireland kiosk outside. You might ask yourself, what’s Ireland doing in Norway? Why aren’t they in the UK? Well, since they put the Ireland kiosk darn near across the lake from the UK, I’m gonna go out on a limb here and say the kiosk is actually “Republic of”. I had the Irish Cheese Plate here. They give you cheese, which is full-bodied and flavorful, and chutney, and butter. That’s three things to try with the brown bread, which is crumbly and sort of unflavorful until you put one of the above on it. The problem here is that there is not enough bread to go around. I had leftover of all three things. I ended up making a sort of fruit rollup with the extra chutney and cheese, but it wasn’t the same without the brown bread. Ergo, this offering from the “Republic of” kiosk gets only a moderately erect thumb.

While chowing down in Norway, a string group came out and played a little ditty, during which they would periodically stop and yell “hey!”. I thought it was funny, and so did some little kids standing by, who would all yell “hey!” with the string players.

After this, I just did the country walk for a while. It was very hot and sticky on the country walk yesterday afternoon, and I kept having to stop to buy yet another bottle of water. Pretty soon I was in France, which had been the ultimate dessert destination in mind. I partook of the film, as always enjoying the music of the French composers, and then purchased the peach tart in the bakery. Ooo la la! It was wonderful. The glaze was not overdone in terms of sweetness, and you could really taste the peaches. The pastry was very flaky and good. Big thumbs up!

After France, the sky was darkening, and I wandered toward the front of the park to stalk the geosphere. It’s got to be one of the most photographed objects on the planet. I have tons of photos of it myself, but I keep shooting at it. Why? Because now it is NAKEY! Gone is the ugly arm of Mickey with the wand and the word “Epcot”. I always thought it was stupid to put the label on it. It’s an icon, a logo, OF COURSE it’s Epcot. What else would it be?

So I waited through two cycles of the fountain show and tried to get something as good as previous shots, but I don’t think the ball-stalking gods were with me last night, because I’m not really satisfied with the results. So I’ll leave you with one from earlier in the day, when I was messing around with composition and perspective. Hope you like it! 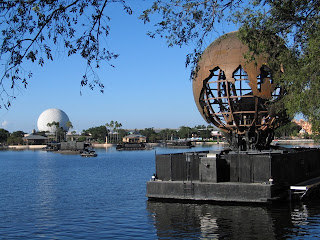 2 thoughts on “The Wednesday Report”