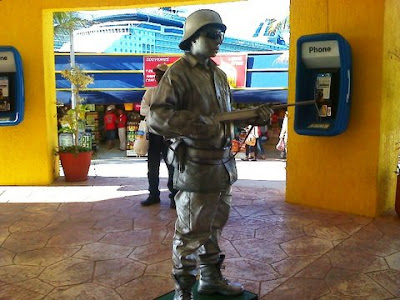 There were a couple of these cool “living statues” standing around, each with a large coffee can for money to be tossed in. 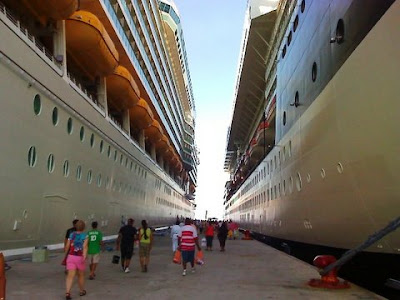 While I was gone, another ship pulled in alongside the Navigator; it was a Celebrity ship, but I forget the name. I was following behind this very drunk woman who kept hollering, “Ah need a WHEELCHAIR!” as she stumbled along. I met up with Lesia as I made my way between the ships and we went through security together. The wheelchair woman said there was no liquor in her bag to delcare, but plenty inside her – we were cracking up! Lesia and I parted in the elevator, both heading back to our cabins to get cleaned up for dinner.

This would have been absolutely PERFECT if it was a longer excursion. As the tour guides were leading a water balloon toss game on the beach, I kept having visions of Mooses crawling all over that island for some future Moose Meet….