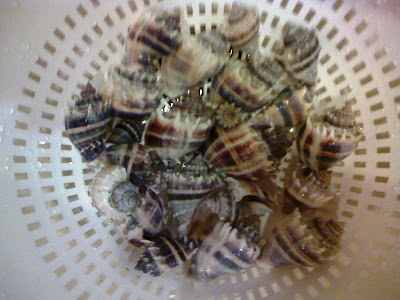 Above, the king’s crowns have emerged from their bleach bath and a good scrubbing with an old toothbrush. They were FILTHY, inside and out, but most of them cleaned up really nicely! 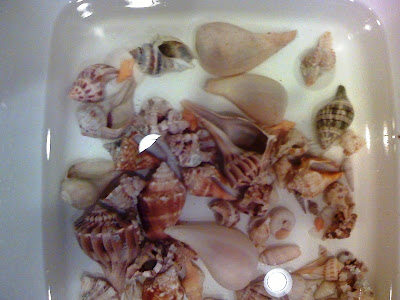 Other shells, still soaking in the dishpan. You can see above that I picked up a couple of decent sized whelks in good shape, among other things. You may be wondering why there’s one lonely king’s crown in there, separated from his brethren. Well, he had lots of greenish mossy stuff on the inside, so he needed a little more time in the bleach bath. Below is the other end of the dishpan. 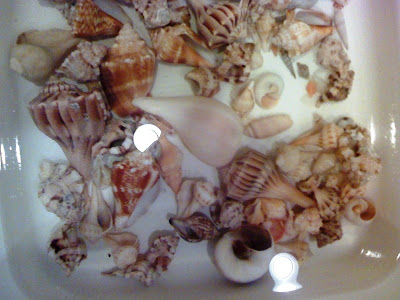 It occurred to me while I was rinsing and rinsing and rinsing the mud from the king’s crowns that the last time I had a king’s crown from the mud flats, some little winged creatures hatched out of it after about two weeks and started dive bombing me all over my house. I could not figure out where they were coming from until one night I happened to turn the king’s crown over, and it was CRAWLING with these bugs! Well, I raced to put it outside, and forgot that the house alarm was set. I set off the alarm when I opened the door to the lanai! It was an “I Love Lucy” type of comedy at my house that night. So anyway, I got to thinking that despite my best efforts to get all the mud (and therefore, any pre-hatchling type things) out of them, I’d best bundle them into the freezer for a couple of weeks, just to be safe. So I’ve put them in a Ziploc and they are now chillin’ out. 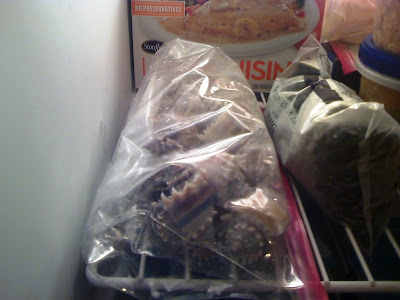 OK, that’s the true end of the adventure. Man, I’m TIRED! I think I’ll hit the hay soon. Thanks for reading!