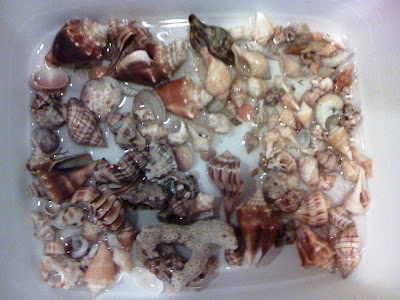 Here’s the whole dishpan full of haul. At Access 7, we hung a right down the beach toward the place with the leaning tree. There was a spot down that way where there was LOTS of stuff rolling around in the breaker line, constantly churning. Very difficult to get anything specific under these conditions. One must employ the scoop/dump/squat method. You haul your net-on-a-stick into the water and just randomly scoop up whatever comes up. Swish, if you like, to remove really small silt and junk. Then run up to above the tide line and dump your haul on the beach. Squat down to pick through. Rinse and repeat. While scoop/dump/squatting my way down the beach, I met a guy who was doing the same, only with two nets-on-sticks at a time. He told me he’d found TWO alphabet cones thus far that morning!

Found a spot where there was about a 3′ deep by 6′ long section of Nanny that was embedded in the sand at the breaker line. It had the effect of trapping stuff in front of it. In this manner, i was able to see and capture a lot of banded tulips and lightening whelks. The bonus was all that mac and cheese and the turbans and a couple of small but very shiny olives. Now that I’ve perused Gary’s shelling books, I understand that the lighter colors aren’t necessarily old and faded; they might be variants. So I was really happy to capture several peachy colored tulips. I think Kim donated several tulips and murex to me as well. She was busy collecting a quantity of calico scallops for her hostess, who is deep into crafting. She even uses the teeth from sea urchins to construct flower petals!

At some point I was in the “spot” scooping and dumping with Chris, Kim was down toward the access entrance hunting scallops at the high tide line, and here comes Anne and Al strolling down the beach. We chatted them up, all the while scooping, dumping and squatting. This activity would cause my quadriceps to burn later in the day, and my calves to about kill me the next day! Kim came wandering over eventually, and by that time Chris and I had determined that we needed to pee and eat, in that order. We discussed going somewhere “as we were” which was completely unshowered and fairly soaking wet, but in the end we decided to go back to Gary’s for at minimum a change of clothing. We took leave of Anne and Al, and I bequeathed them my net-on-a-stick so they wouldn’t have to buy one this trip. I have a garage full of them; I tend to forget to grab one from the garage, and then when I get to the island I just slap down five bucks and buy a new one. Kim pretty much destroyed Bonnie’s. I guess Bonnie is getting a new net-on-a-stick!

2 thoughts on “The Haul”