Scenes From Sunday on Sanibel

I know that a lot of you reading might be missing Sanibel and wishing you were here. You’re coming off a long, hard, cold winter, and it might still be a little chilly where you are. So we’re going to kick things off with a little sun, sand and surf for all uh y’all.

Now, we’ll take a walk through the resort. Chris said she wants to try and keep the place a secret, yet she went and posted a pic of the sign out front on her own blog. Far be it for me to give her a reason to have a little cheese with her whine, so I shan’t mention the name of the place in this post. I shall let you figure it out all on your own.

First, a little walking tour up the path from the beach. Chris had picked up a dead crab earlier, and decides that I NEED to know his status…

Here’s Chris walking up that same path, having a bad case of Plumeria Envy: 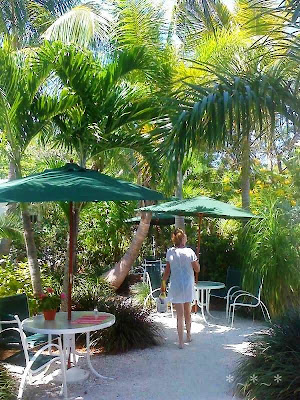 If you have some plumeria trees and Chris is staying anywhere near you, I strongly advise you to put up a fence around ’em, or chain a vicious dog to ’em at night, or something. I’m just sayin’….

So while we are at the resort, let’s take a peek at the unit. It’s pretty roomy inside. There’s a nice-sized living room outfitted with a TV, love seat and sofa that is supposed to pull out into a king size sleeper. 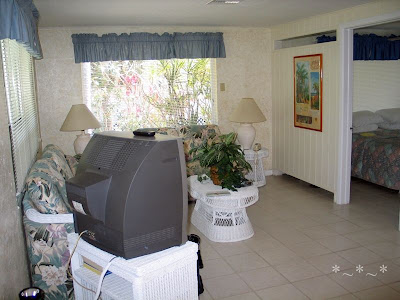 Unfortunately, the frame on the sleeper part of the sofa seemed to be bent, for it stubbornly insisted upon not unfurling on demand like all good little sleeper sofas are supposed to do. Are you old enough to remember the commercials with 5-year old Bernadette Castro unfurling a Castro Convertible? “So Easy, Even A Child Can Do It”. Did you just hear the jingle in your head? No? Here, I’ll help you –

Who saves you money all the time?
Who’s tops in the convertible line?
Castro Convertible!

All of this by way of saying – we ended up closing the sleeper back up and throwing a sheet and a pillow on the sofa and that’s where I crashed!

Here’s the kitchen, with our lovely model Christene, preparing to make margaritas – 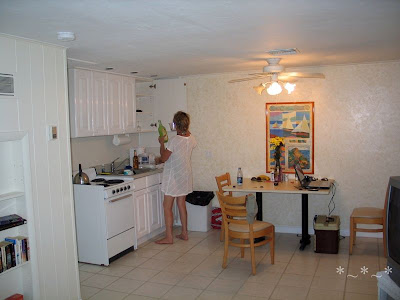 One thing I really appreciate about This Place That Shall Not Be Named is that there is a back door on the unit that comes straight into the bathroom. Out the back door there is a water spigot where you can rinse the sand out of your shells, water shoes, towels or children, and a long shelf for laying them out to dry. All except the children, I mean. Those you can rinse and then bring ’em in the back door to dry ’em off. This way, they don’t have an opportunity to make the floors in the rest of the cottage icky. Yes, this back door thing is a Very Cool Idea – I give it a thumbs up. 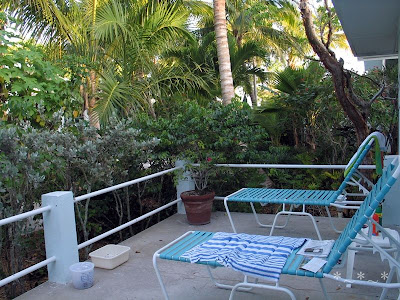 Another thing I love is the lush landscaping. Out front of each unit, there’s a lounging patio. You can see from this photo that the vegetation is pretty dense, giving a feeling of seclusion from traffic on the path. The only downside of the vegetation is that it harbors “teeth with wings” aka noseeums. They were out in full force and biting like mad on Sunday evening. If you weren’t in the wind, you were in trouble!

During one of our forays on the beach, we met a dog that shells! I do not remember the name of the dog, but the breed was “puggle”, which I believe is a pug-beagle mix. We were walking by and this dog was bringing shells to his owner, who was lounging in a chaise. Too funny! So I stopped and asked if I could blog the dog, and the owner said “sure!”. Unfortunately, the dog was either becoming shy or getting heat stroke, because as soon as I attempted to take a photo, under the chaise he went. I eventually just took the lousy shot here, but at least you can see he’s got a shell in his mouth (looks like a broken pear whelk to me). 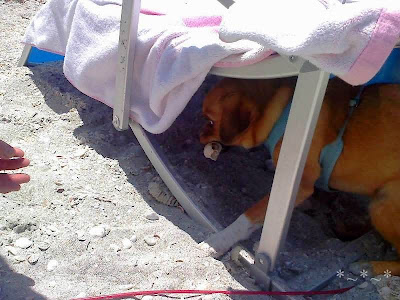 During another foray, we met up with Dale and Wayne. First time for me! They’re both swell people. Dale had found a nice big horse conch, and Wayne was having good luck just reaching in and pulling murex out of the sand. We split up after a bit, with anticipation of meeting up again early tomorrow morning for the big event. Then Chris and I went back and called in an order for takeout from Doc Ford’s Doc Ford’s which Chris went and picked up while Jon made a salad and I sat on my slack ass reading one of their shelling books.

What we ordered: clam chowder, the infamous beach bread, calamari, and penne with rock shrimp. You can see it all below. That’s Hermie T Crabbe coveting the beach bread. He can have it; as much as people rave about it, I thought it was just average. I would not go out of my way to get some. 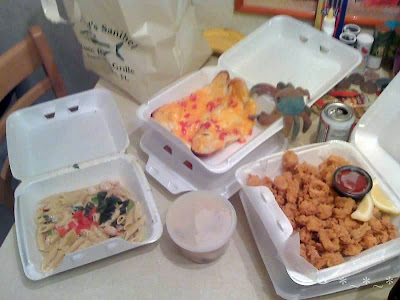 After dinner, we cleaned up and since it was still light out, we went ONE more time down to the beach. Tide was coming back in, and the sun had just set, leaving a pretty streak across the western sky. 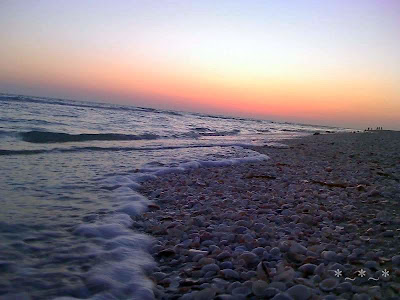 I was experiencing intermittent signal problems. The signal was much better and stronger on the beach than it was at the cottage, so I thought I’d stay down there a bit and send things that had failed. However, the noseeums, those bloodthirsty menaces, soon drove me indoors. Showers and pajamas ensued. Chris and I messed around on the internet for a while, admiring my live mobile photo blogging handiwork and sending messages to our beloved SaniBuddies, but soon we all turned in to rest up for our big adventure on Monday – The 3 Hour Tour, aka A Meeting of the Redneck Yacht Club.

NEXT TIME: Stay tuned, there’s more! We still have to go to Jensen’s and get the boats, then on to Cayo Costa for shells and Barnacle Phil’s for lunch!

5 thoughts on “3 Hr Tour: A Meeting of the Redneck Yacht Club, Part 1”