There was a visual that was supposed to go with my last post of yesterday (it was audio only), but somehow never made it through. Here it is: 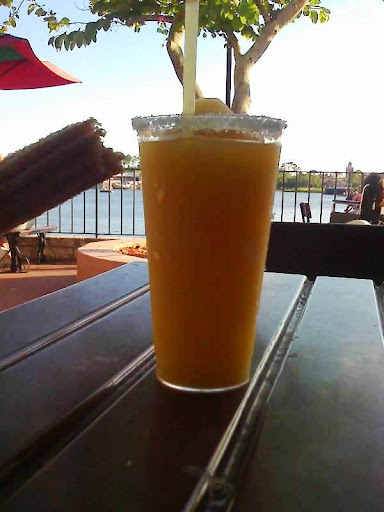 For those who do not recognize the subjects (or don’t yet know my Walt Disney World vacation habits), that there’s a churro (bitten) hovering next to a mango margarita, and I am sitting at a table down by the lagoon in the Mexico section of EPCOT.

After I sent my last message, I used the remaining dregs of cell phone battery life to make contact with SIL. I last saw her at Hollywood Studios (ugh, I wanna say “MGM” sooooo BAD!). That’s where we’d all spent the day. When last we’d spoken, SIL was taking Nieceling to see Indiana Jones, while Chez Bro and I headed back to the hotel. He wanted a nap and I wanted to go back into EPCOT sans the shirt I’d bought. Yes, I bought the one that says “Please stand clear of the closing doors” in Spanish – I LOVE that shirt! I dropped the shirt in my room, and then took the boat into EPCOT.

Back to EPCOT, and the Flower & Garden Festival

When I came in through the International Gateway, I made a left and did the Rose Walk down to where the garden sculptures are on display, making a tiny pitstop to listen to The British Invasion before moving on. Also went to see the combination kitchen/container garden, which had some REALLY healthy cabbages growing in it – they were perfect-looking. The CM there was friendly, and telling me stories of battling the rabbits for dominion over the container garden full of veggies.

I also visited the butterfly garden and saw some monarch butterflies engaged in the act of procreation! After that, I needed a drink and went to Mexico for the margarita and churro. When I was done there, I went on Spaceship Earth and made my way to the front-of-the-park-display, which consisted of Goofy catching a wave, while Minnie and Mickey collected sea shells on the shore. Yes, sea shells – w00t! I took about a ton and a bazillion photos, and did some video too, in order to capture the Beach Boys music that was being played. Definitely loved this display – mad props to the topiary department!

Motorin’ on the Monorail

Finally, I got on the monorail and headed out for the TTC, where I changed for the resort monorail. I was meeting da fambly at California Grill, inside Disney’s Contemporary hotel. On the way, the monorail in front of mine had some sort of drama going on at the Polynesian hotel, so there was somewhat of a wait; I believe I heard it was a sick passenger. I made it to the Contemporary eventually, and we all went up to have a splendid dinner and see the fireworks from the observation deck.

At the Magic Kingdom, it was a Pirates and Princesses night. While I was at the TTC changing monorails, I saw grown people dressed as pirates, headed off to the Magic Kingdom! So, seeing as it was a Pirates and Princesses night, there was a different fireworks show. It was absolutely magnificent! I think it was better and higher than Wishes. There were also fireworks coming from different sections of the park, other than from the castle or behind it – “360* fireworks”. We really loved this show.

Dinner at the California Grill

We also loved our meal. I hardly eat beef any more, and I had been saving myself for months so I could have a filet at the California Grill. I was not disappointed! The food was awesome, and we had a great bartender too, which I will tell you about at another time, because it’s 9:50 in the morning already, and checkout is at 11:00 am.

So, I’m gonna jump in the shower, pack my bags, and head off to Downtown Disney. Here’s my strategy. I saw some cute shirts in the parks that I’d like to have but want to check DTD first because I can get the discount at the World of Disney store. After DTD, I will head back to EPCOT to roam the places I didn’t roam yesterday and buy anything the World of Disney store didn’t have. I would love to be on the road back to Southwest Florida around 3:00 PM. That will put me going through Tampa around 4:00 PM, which I’ve done on a weekday before and found it OK. Any later than that, and honestly, I might as well wait till 7:00 PM to leave Orlando, which will put me home around 10:00 PM – not really what I want.

Da fambly is going to Sea World today, and they have a late flight back to the Loverly Isle of Long this evening.

So…. lemmee get going now, and I’ll catch you later in the parks!

4 thoughts on “Recap of Memorial Day at Walt Disney World”