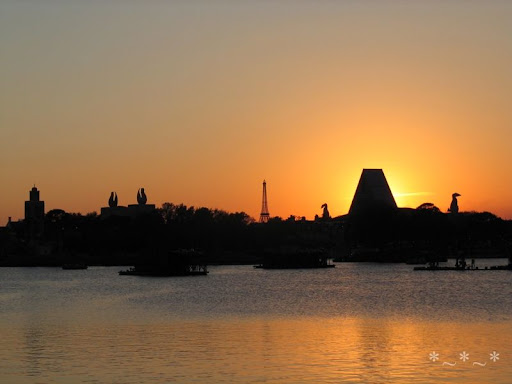 Even though the pretty tree branch “frame” is gone, we can now see the buildings in starker contrast against the sunset colors of the sky. What’s interesting to note is that The Walt Disney World Swan and Dolphin resorts are actually a lot further away than the other buildings, but because everything is in silhouette, you lose a dimension and therefore the sense of distance between the photographer and the buildings – and even the sense of distance between the buildings themselves. In fact, in this photo The Dolphin actually looks closer than France, but the reverse is true. It’s just that The Dolphin is a much bigger structure than the tower, so even though it is further away, it looks closer!