I get a kick out of the sharp contrast between the word “city” (as in, “city of Fort Myers”) and the presence of cows grazing unconcernedly on the empty parcels of land that are sprinkled between new building boom developments, university satellites and the ever-encroaching strip malls. In my mind, Tampa is a “city”, for Tampa has a “downtown” with sky scrapers. Fort Myers? No sky scrapers, therefore not a “city”. My Long Island-bred eye sees this “city” as more of an area of wannabe suburban sprawl. I’d remove the word “wannabe” if it were not for the rent-a-cows. 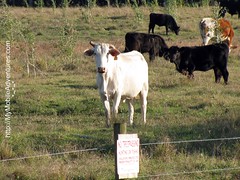 Actually, I recently discovered that it’s not the cows that are rented – it’s the land. Property taxes are drastically reduced for those who pasture cattle. If there’s a guy that owns land but no cows, and a guy that owns cows but no land, then a lease agreement can’t be far behind. The cattle owner will pay the land owner to use the empty land as pasture for the cows. I always thought it should be the other way around. The land owners should be paying the cows for giving them such an awesome tax break. Probably, the landless cattle owners should rise up, form a cow cartel, and turn the tables on the guys who are getting the awesome tax breaks. I just hate to think that the cows are performing such a valuable service to the land owners, yet in the end their only reward is landing on someone’s plate. It just doesn’t seem fair. (To read more about the business of raising cattle in Southwest Florida, check out Florida Weekly’s recent article called “Local Beef…it’s what’s for dinner someplace else“)

We even have cattle rustling here in Southwest Florida! Early in the new year, 10 head of cattle, including a valuable Angus bull, were stolen from a “rent-a-pasture” in Charlotte County. The rustler was unfortunately not very bright, for he drove the contraband bovines to an auction and tried to sell them, apparently failing to notice a rather prominent and totally identifying brand on the hide of each of his ten hostages. The authorities were summoned and the cow-napper was apprehended (“Deputies Arrest Suspected Cattle Rustler”) I found the cows in these photos pastured on an empty stretch of land adjacent to the new Kohls/Sports Authority/Circuit City strip mall on Six Mile Cypress Parkway. This field is pretty close to the intersection with Colonial Blvd. in Forty Myers, Florida, and used to be much larger, able to accommodate many more head of cattle plus a “watering hole” of sorts – but then the Kohl’s/Sports Authority/Circuit City strip mall was built. I’ve only lived here three years, and I’ve already seen a lot of this sort of thing. Formerly open spaces are now covered with housing and retail developments. A stand of woods is leveled and cleared to make way for a new chain pharmacy. Literally, they’ve “paved paradise and put up a parking lot”. I’d object more strenuously than that, but that would make me a hypocrite. Five years ago, a tangle of wilderness reigned where my own house now stands. I can see that someday, the intermittent open spaces where the cattle currently roam will be gone. The bottoming-out of the housing market has slowed, but not permanently halted the inevitable. Someday, the land owners will have sold all of the open spaces to developers, who will erect yet more townhouses and supermarkets upon them. I wonder where the cows will go when that happens?