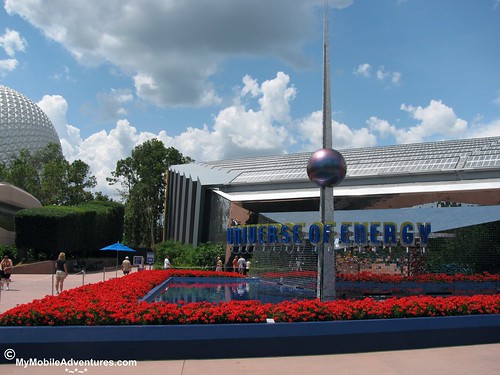 🙂 The Universe of Energy attraction at EPCOT reminds me of a pavilion at the 1964 World’s Fair, which took place in Flushing Meadow Park in Queens, NY. I was four years old, going on five when the Fair first opened, and since my family lived in Queens, we attended a number of times. Disney had helped to produce several of the pavilions there, and one of them was for the Ford Motor Company. You sat in these “people mover” type vehicles that resembled classic Ford automobiles, and cruised through various tableaux while seated in them. One of these tableaux was filled with animatronic dinosaurs, representing Disney’s early attempts at the robotics that would later dominate many Walt Disney World attractions, including the Carousel of Progress (also present at the World’s Fair), the Hall of Presidents, the American Adventure and yes, the Universe of Energy.

The current show at the Universe of Energy has been running since 1996. It stars Ellen Degneneres, and also features Billy Nye The Science Guy, Jamie Lee Curtis and Alex Trebek of Jeopardy fame. The plot has Ellen adventuring through time with Bill, where she learns all sorts of things about the production of energy. She then uses her new-found knowledge to beat her old high school nemesis Judy (played by Curtis) in a rousing round of energy-related Jeopardy questions. Go, Ellen! Here we see the reflecting pool outside the Universe of Energy attraction, bordered by bright red flowers that make this photo jump up and shout, “Ruby Tuesday!”.:)