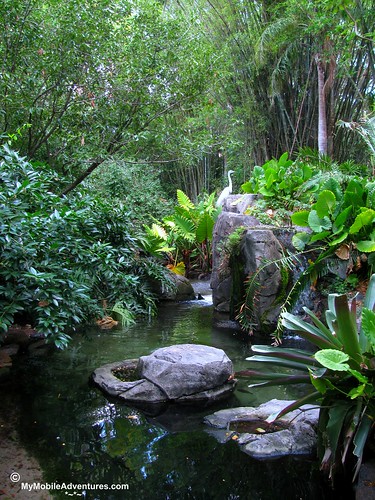 🙂 I was walking in the Oasis, a quiet, lushly green and tranquil section just inside the gates of Disney’s Animal Kingdom park. It’s a soothing place where you’ll find twisting paths, a rope bridge, a joyously tumbling waterfall and all manner of exotic animals and birds. The day was hot, and the air was heavy and still. The silence was broken only by barely discernible ambient music and the gurgling of a stream. I rounded a corner and came upon a beautiful glade that surrounded a pool. And there he stood, on a rock – a Great Egret.

I became excited when I realized that he was in full breeding plumage. My heart started to beat faster; it was so loud in my ears, I was sure he would hear it, become frightened and take flight. I think I might have even been holding my breath. I crept forward to get a closer look, reaching into my bag for the camera. 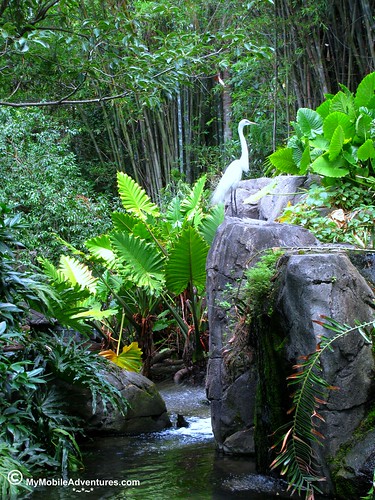 The closer I got, the more convinced I became that he very well knew that he had company and didn’t mind in the least.. He seemed to straighten a bit and puff out his chest. I took this as a good sign in terms of getting some photographs, and I was no longer afraid of making the slightest sound. The mechanical whir of the camera’s lens opening and extending broke the reverie, contrasting sharply against the backdrop of rushing water and the far-off exclamations of other types of birds who lived at the Oasis. The Great Egret stood his ground, unperturbed. I fired off several shots of him just standing there on the rock, playing with distance and focus. He started to fuss a little, and I stopped shooting, holding my breath again, finger hovering in mide-air over the button.

And that’s when he did it… 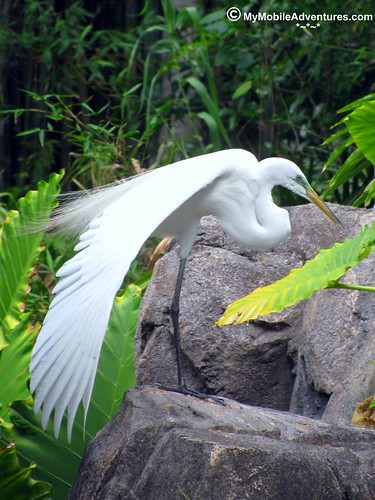 … the Great Egret VOGUED for me!

8 thoughts on “Strike a pose, there’s nothing to it…”