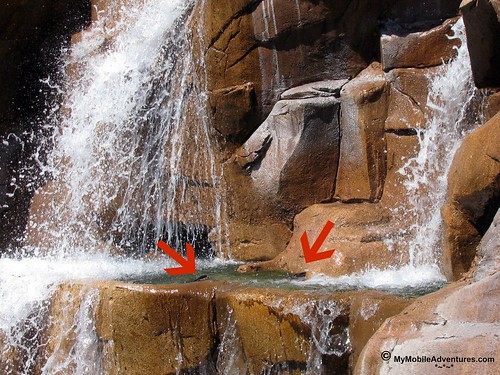 🙂 Long time readers might remember that I once posted about shoes I’d discovered in the O, Canada! pavilion at EPCOT. I was at Walt Disney World one fine day last spring with my friend Debbie who happened to spot the shoes lying on a rocky ledge into which water from the falls poured. You can click here to see some photos. If you read a few of the comments, you will understand that Disney Cast Members who work in the O, Canada! pavilion seem to know all about the shoes and indicate that they will take the secret to their graves.

By the way, the next time I visited was December, and the shoes weren’t there, but I found another strange item in an out-of-the-way place. I guess you never know what’s going to pop up next in O, Canada! 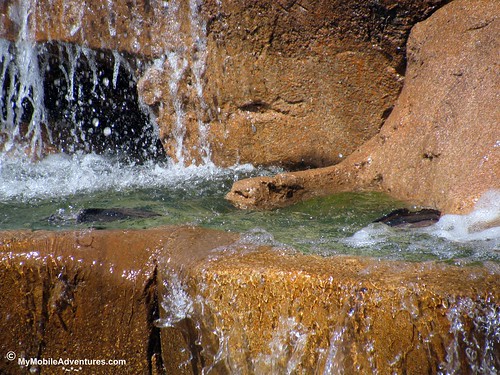 When comparing pictures in this post to those in the post from last year, you can see that last time the shoes were perched on the craggy ledge of the cliff. However, this time the shoes are bobbing perilously in a shallow pool that has formed on another section of the ledge. How, I wondered, did the shoes get into the pool? Did one of Florida’s exotic water fowl land there and knock them in? Were they transported by human hands? Telepathy? Mice? Yes, mice. Haven’t you seen Cinderella?

If they can sew a ball gown, they’d have no problem moving a pair of shoes! 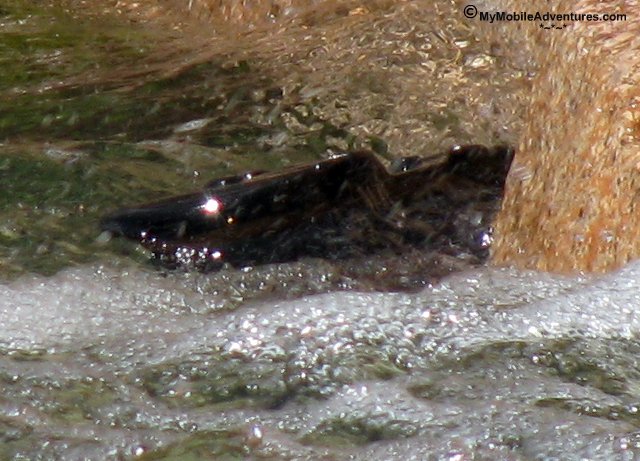 I do think there is something very strange afoot (no pun intended… ok, maybe just a little). What were the shoes doing there in the first place? Was there foul play involved (note I did not say “fowl” play, for that would make two allegedly unintended puns in a single paragraph, and we can’t have that)? How did all those Cast Members happen to show up at my blog MONTHS later to make cryptic remarks and never explain themselves or the secret of the shoes? Are these the SAME shoes I saw last year, or are they a different pair, owned and lost by a different doomed soul whose single misfortune was to have apparently wandered onto the wrong craggy rock!

What do YOU think?

What is the significance of Canada’s magical mystery shoes, and how did they get there?

Are they just a prop – official or unofficial – or are they the actual shoes of a real, live person?

Is it a guest prank? A Cast Member prank? Not a prank at all?