This is the final installment of my first field trip with the Florida Master Naturalist class (Coastal Systems Module). Last time, we explored a few critter encounters at Bowditch Point. Now we’re going to continue on our journey over the hill, through the dunes and onto the beach.

The day was getting pretty warm, and a few of the plants had an “aromatic” (translation: unpleasant!) odor. I believe it was the plant described to us as a “stopper” plant, used by the Calusa natives once upon a time to make a purgative drink. The Estero Island Garden Club created a butterfly garden at the top of the hill. There’s a statue of a child fishing in the butterfly garden at Bowditch Point Regional Park. I got a kick out of the fact that they use a real branch as a fishin’ pole 🙂 I’ve written of the EPCOT mystery shoes before, as well as a few non-Disney pairs of mystery shoes. But here’s a new pair – the Bowditch Point Mystery Shoes! They were on a bench near the butterfly garden while our guide was walking us through, and still there an hour later when I came through to take some pictures. Ya gotta wonder… There are a lot of coontie plants at Bowditch Point Regional Park. I believe this one is a female. The cones are shaped differently for a male. No I’m not kidding – male and female! This is called a dioecious plant – that’s Greek for “two houses”, and it means that the plant is either a male or a female. The Seminoles dried and ground the roots into flour and made it into bread. I’ve heard it referred to as arrowroot too, but there’s another plant called that… confusing, the world of botany! I guess that’s why people like to use the Latin names. There are no mistakes when you stick to the Latin names. So I’m told! You’ve heard of it all your life and now you’ve met one – it’s the prickly pear cactus! A few years back, I saw some of these fruits for sale in Publix but didn’t have the guts to try them. One of our classmates said he’s tried them and he felt great after a few days of eating them – I think they have anti-oxidant properties. Anyhow, the tortoises love ’em so they can’t be all bad, right? Railroad vine is related to morning glories and so is their behavior – they are open during the day and close up once night falls. The Latin name, ipomea pes-caprae, relates to the shape of the leaves. Google Translator is telling me “foot she goat”, so I guess the leaves are supposed to look like a girl goat’s hooves (so what do a boy goat’s hooves look like, then?). Sea grapes grow in a bunch but you can’t really pick ’em that way. They don’t mature/ripen as a bunch; they are individuals and each decides in its own time when it is ready to be ripe. That’s why you generally see only some missing from a cluster; the other ones weren’t yet ready to eat! This tree is called the strangler fig. It’s less than 20 years old and stands pretty much on the crest of the hill, spreading shade in a wide swath. Migratory birds like to stop and rest in this tree, for the fruits are nice to eat. The seeds are spread around via bird poop. Sometimes, the poop lands on another tree, where the new baby strangler latches onto and eventually envelops the host. As you can see, they have a pretty aggressive root system, too. I find it funny that one of my Florida landscape plant books identifies companion plants for the strangler; I’m fairly certain it’s just going to kill all its friends so I’m not getting the point….. Well, here’s at least one friend that the strangler won’t bother to strangle – a coontie grows low and spread out in the considerable shade. Our guide pointed out how different it looks from the ones in full sunlight. It definitely looks to me as though it is reaching around to find some sun. 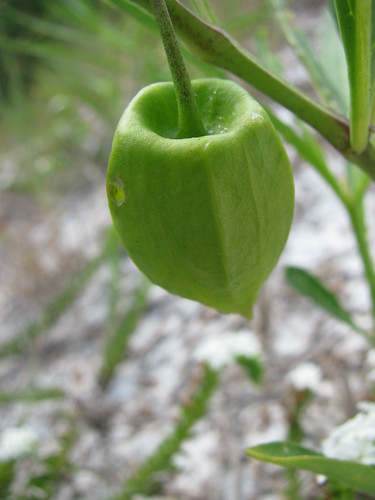 This plant has so many names, where do we begin? Chinese lantern, common ground-cherry, husk tomato (I’m told it tastes like a tomatillo), sand ground-cherry, bladder cherry (it floats)… a lot depends on where you live, I guess, when it comes to common names. Gopher tortoises like to eat these, too. I guess it makes sense – it’s certainly low enough for a tortoise to munch upon. These daisy relatives are called dune sunflowers. They pop up basically everywhere in the coastal system and they flower year-round, with just a bit of a break in the winter time. They are also related to Indian blanket flowers. Because of the way the tides flow around this area, Bowditch Point gets eroded and the sand is carted away by the sea. Periodically, the government will decide that “renourishment” is in order. The get a barge and a bunch of pipe, park the barge out in the bay and pipe in sand from “out there” somewhere. On the one hand, it’s intrusive to the environment and counter to what Mother Nature seems to want. On the other hand, Lee County is pretty dependent upon tourist dollars and cannot afford to have any of their public beaches get washed away. I checked this out pretty thoroughly before determining that the pipe was NOT bringing in quantities of good shells. Then I headed for the parking lot. There’s a shower and a foot sprayer behind me; to either side are little picnic areas and pretty flowers. It was a long morning and it was getting REALLY hot. I decided I was ravenously hungry and proceeded to meet friends at Jerry’s on Sanibel for lunch before heading home. Thus endeth the first field trip – but fear not, there’s more where this came from – stay tuned!