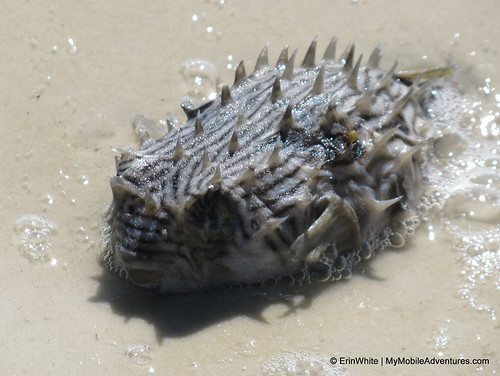 After photography class the other day, during which I was treated to a dizzying array of fun facts about my digital camera, I went for a walk at San Carlos Bay Bunche Beach Preserve in Fort Myers. The Gulf coast has suffered a recent spate of red tide occurrences, ranging from up in Sarasota to as far south as Naples, on the northern tip of the west Everglades. This, combined with a series of cold fronts, has resulted in some fish kill. While dead fishes washing up en masse isn’t fun for anyone, it does afford an opportunity to examine species that a non-fishing enthusiast (like me) would not normally get to see.

This is a *striped burrfish*, also called a *spiny boxfish*. The first thing I noticed about it, aside from the painful-looking spines, was his black spots. This reminded me of some butterfly species who have “false eyes”, dots on their wings that fool predators into thinking it’s a much larger “something else”, something not so tasty as a butterfly.

According to some quick research, the striped burrfish seems to like warmer waters than we’ve had; although they range up to New Jersey for spawning, that usually happens only when the water up north is warmer, typically July. The southern end of their range is the West Indies. The beaches were cleaned of dead fish after last week’s episode with red tide, so I’m leaning toward the possibility that this little dude expired of the cold.