Someone on the Disboards forums remarked that they had never seen the tunnel of holiday lights through which one can walk from Future World into the World Showcase during the holiday season at Walt Disney World’s EPCOT. I knew I had photos somewhere, and I even had a scan of the festival guide (see at left), too!

This holiday display is not only amazing eye candy, it’s a photographer’s dream. I am by no means anything beyond a point-and-shoot type myself, but with the way digital cameras operate today, even I was able to get some pretty cool shots of this wonderous display. I mean, the only thing that’s missing is the snow! Um, NO, I am not wishing a snowstorm on sunny Florida during the holiday season, or any time soon; we get enough freakish weather ’round these parts, thankyouverymuch!

This reminds me, I need to make some hotel reservations for early December, as I’m taking a professional certification exam in Orlando and want to spend the rest of the weekend taking in the holiday decorations at Disney World. Putting that on my To Do list for this weekend.

For those who haven’t seen this before – happy viewing! And I hope you get to experience this yourself sometime, too! 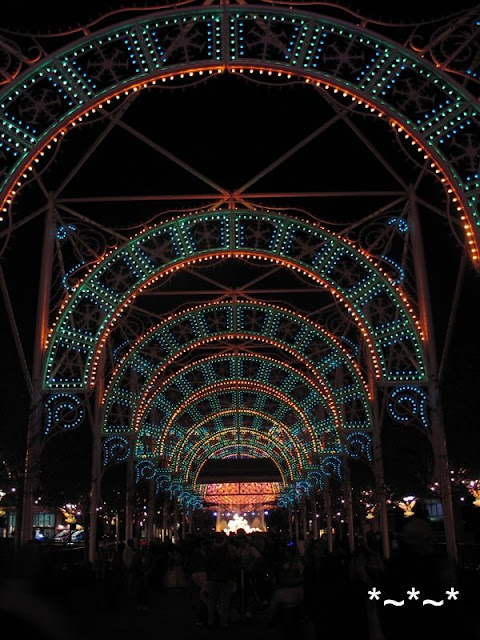 Here’s the whole “tunnel”. You’re looking toward Spaceship Earth/the geosphere, but you cannot see it because it is DARK! 😀 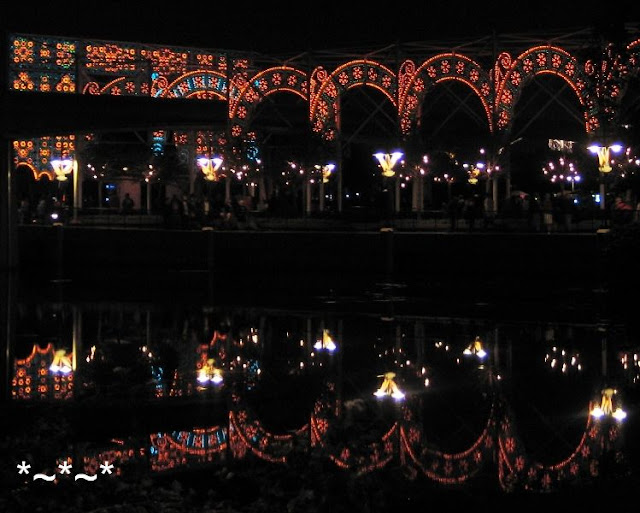 Here’s a side view, with the reflection in the lagoon that I was talking about in my post on the Dis. In this view, you can see that the “tunnel” is really a series of arches strung together along the walkway from Future World into World Showcase. 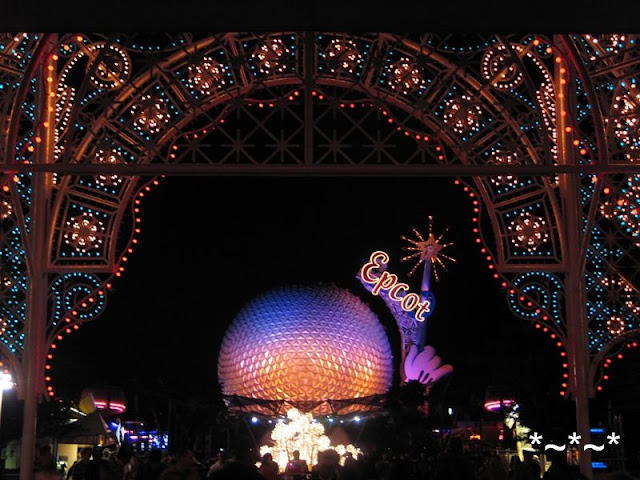 Finally, my favorite shot! This photo becomes my desktop wallpaper around the holidays. I think I will have to re-take the photo this year, because the Hand Of Mickey has been taken down, so it will be a whole different shot now.

Does anyone else have photos of holiday lights at any of the Disney parks? I’d love to see them! Please leave a link in the comments so I can check out your photos. Thanks!

Going to Long Island for Christmas – see ya real soon! 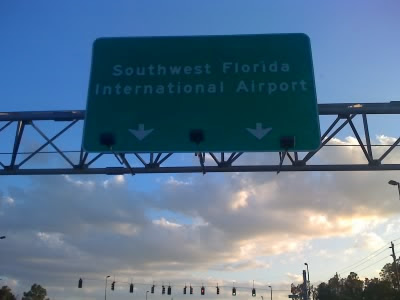 My older brother yelled down the basement stairs that there were elves in the driveway, peeking in the windows, listening to Chez Bro be naughty. He said the jingling sound was elf bells! And that Chez Bro had better be good or else there would be no presents, because the elves would tell Santa on his ass!

(Years later, at a Thanksgiving dinner, a bunch of adults sat around their parents’ dining room table, making confessions. It was at this time that we all confessed to having HATED three bean salad as children, and told of the artful ways we would dispose of it to show clean plates. One method, which may have been a tall tale spun of too much Thanksgiving dinner wine, was to pass it out the dining room window to the first person that managed to escape. However, we did not employ the “feed it to the dog under the table” method, because even the dog despised three bean salad. No dogs were hurt in the disposal of the three bean salad! So anyway, after the three bean salad epiphany, whereby my mother vowed never to serve us three bean salad ever again, big brother confessed that the jingling was my mother’s car keys.)

So I thought back to this day long ago, and decided that the elves could visit Temecula, California that year. I ran around ringing the bells all day at various places, which caused a stampede of children rushing to the spot to search for and gather evidence. They had a whiteboard amongst their playthings, so we set that up as a map of the house and yard, marking it with a big red “X” everywhere we suspected the elves had appeared. Clues like glitter in the grass and bits of green sea glass were found in the vicinity of where it was believed the elves had rung their bells.

“But HOW will the elves tell on us? Santa is at the North Pole!”, demanded one of the older children of the neighborhood. Ah, that’s easy. The elves whip out their little cell phones and leave Santa a voice mail, telling him the date, time, city, and name of the child who had committed the infraction.

Getting close to dinner time, I took the elf hat and snuck outside. I found a stick, and lurked beneath the livingroom windows. When the children came into the room, I bobbed the hat up and down on the stick, just so they could see the pointy tip and pom pom, as though the elf were marching around out there. With squeals, there was a mad dash for the door. I ditched the stick in the bushes and arranged myself in a sprawl on the front walk, still clutching the hat. The door sprung open just as I began to yell, “I almost had him! I almost had him! Look, I GOT HIS HAT!”

They were all gathered round me in a little knot, this wild woman with an elf hat. Their eyes were large in their heads. There was not a non-believer amongst them.

Thus was born The Elf Game.

The Elf Game was invented on Christmas Eve in Temecula, California, sometime back in the 1990s, based upon a random Christmas Eve occurrence from my childhood. I had flown in from Long Island that year to spend Christmas with my friend Penny and her family. She’s got two girls, and I think they were about 6 and 8 years old at the time.

Penny decorates her home like a mad woman. Every surface is covered with Christmas “stuff”, which is hauled out and distributed around the house each year, and then returned to the various Rubbermaid bins from whence they came. This particular year, whilst wandering about the house, I discovered two implements of elf were at my disposal – a set of hearty jingle bells (not the namby-pamby type, but the kind you’d expect to find around the neck of the horse drawing the one-horse open sleigh), and a Santa hat. A wicked plan formed within my brain.

Early in the day, the bells were heard at odd moments, coming from various parts of the house and surrounding yard. The first time they were heard, it reminded Auntie Tink *~*~* of a day long ago, a Christmas Eve just like this one, only there was snow and coldness and no palm trees. Ok, not so much like this one, but it was Christmas Eve nonetheless. And Auntie Tink’s *~*~* baby brother Chez Bro was being very, very naughty. He was playing in the basement and had decapitated his teddy bear. He was generally running berserk. He was yelled at, he was threatened, he was pleaded with – nothing worked.

Suddenly from upstairs we heard a jingling sound…