Where da heck did the new pass go? 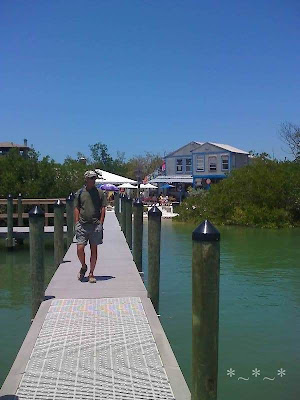 Here’s Wayne, walking down the dock, with Barnacle Phil’s behind him. We’re all fixing to leave and go shelling again. We had this vague idea that after lunch we’d head to the new pass that Hurricane Charley had made several years back, and see if it was true that there was good shelling to be had there. One would think that one would recognize a pass when one sees it. However, we suspect that it has become pretty well filled in, because we all sped right by it and ended up in Redfish Pass instead. There really wasn’t a place to beach the boats; there was beach, but the current is exceedingly swift coming through there. So we turned around and tried to find the new pass.

Along the way, we slowed down to watch a man trying to hand-feed a dolphin off the back of his boat. DON’T TRY THIS AT HOME. Although it is cool to have a dolphin come up to your boat, it’s a bad idea to try and hand-feed them. This is not Sea World; these are wild animals.

We continued to putter along until we found the place where we thought the new pass was. It was very shallow, and the folks in the other boat urged us not to attempt it, as there were still tree stumps lurking, and our prop was already stirring up the bottom – it was that close.

Later, Tootie told me that there was another reason not to try to go in there – she said that there’s a nude beach in there! =8^0 I remember news stories over the years of the nudists getting in trouble all the time out here, but now the story is that they have purchased several contiguous lots so they can be nude in peace.

I dunno… I have a lot of respect for the sun and what it can do to the skin. I guess they must go through a lot of sunscreen. Or else, maybe they pitch tents on the beach?

Seeing as how we didn’t have deep enough water to beach the boat and explore, we decided to head back. Wayne took it at a leisurely pace, and we were able to watch some pelicans diving for their dinner –

When we got back to Jensen’s marina, we spent some time browsing the shop, getting t-shirts, making a bathroom break, and settling the bill for the boats. We also gathered ’round to hang out with the manatees a bit. 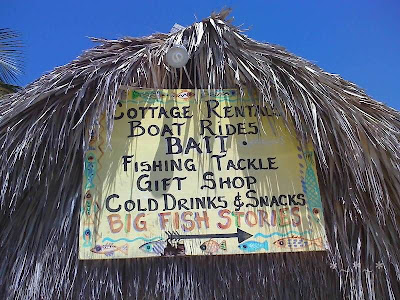 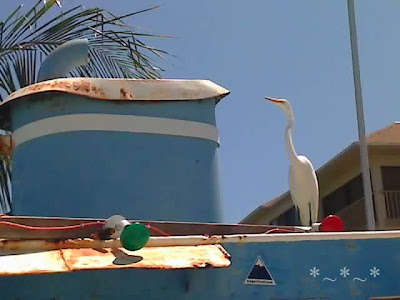 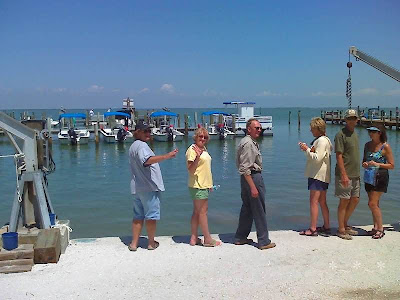 The Gang’s All Here – Gary, Tootie, Jon, Chris, Wayne and Dale gather to do a little manatee watching 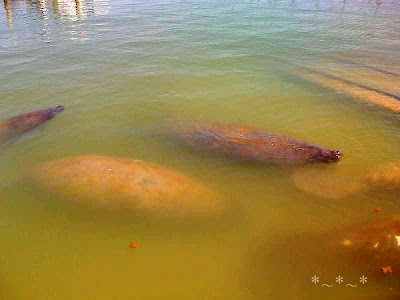 Too soon, it was time to say goodbye and end this fine day. There were hugs all around, and then we all piled into our vehicles. Picked up my car at Chris & Jon’s resort, and proceeded to Gary’s where Tootie was holding onto a plumeria that Chris had rooted for me. Finally, I got into “the sad lane” of the causeway and made my way home. 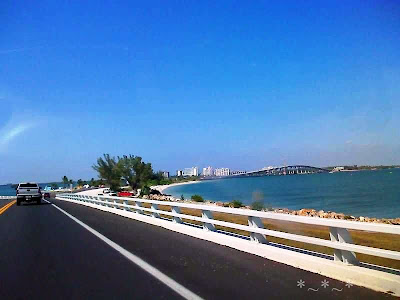 I did manage to see Dale, Wayne, Chris and Jon one more time before everyone departed for home. Wednesday, they went to Blind Pass and caught a mess of fish. So after work, I headed out to the island for a cookout. The fish was delicious, and it was good to see them all one more time before heading home.

In the meantime, more friends have come into town, so we’ll be embarking on another boat tour of the islands on May 16th.

I’m starting to get into a Walt Disney World mood, though. I have a trip to Orlando coming up at the end of the month. The Flower and Garden Festival is in progress at Epcot, and I will also be able to spend some time with Chez Bro and his family.

This is why I don’t have time to be injured! The neck and shoulder were only marginally improved this morning, and that’s only because I found some muscle relaxants in the medicine cabinet from the last time I had some stupid injury. I’ll definitely be calling the doctor in the morning to see if I can get in there and have this looked at. Please God, don’t let it be a torn rotator cuff or some other thing that requires surgery!