Here’s some bonus footage from the my field trip on Estero Bay with the Florida Master Naturalist program here in Lee County, Florida. One of our classmates made up a song about the joys of Estero Bay and the dolphins seemed to love it. They ended up chasing our boat for a few minutes, leaping in and out of the wake as we sang our way toward the dock. Check it out in this video, below – Email Subscribers: if you do not see a video posted below this sentence, please CLICK through to the blog. 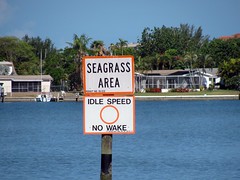 As mentioned in my previous post, Estero Bay is very shallow. Sunlight penetration allows for the growth of sea grasses (they’re green, they need sunlight for photosynthesis), and sea grasses provide an excellent nursery for marine life, which in turn provides excellent feeding grounds for birds and bigger marine life.

If you speed through and your prop tears up the grasses, then you’re destroying habitat and the whole ecosystem is compromised. So, always pay attention to the “no wake” and “low wake” signs – they are there for a VERY good reason. 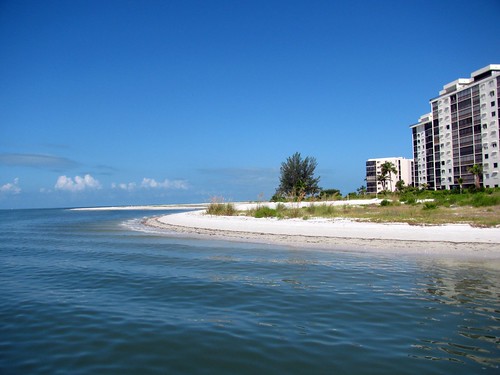 “DIVE-BOMB BEACH”
As we rounded a corner and emerged from under the Big Carlos Pass bridge, we saw tall high-rise buildings standing sentry over a stretch of unraked beach – kind of unusual, since beachfront high-rise residents usually want to see an unblemished expanse of sand, not dune vegetation. This beach is unraked because it is a bird breeding ground. While we were floating out here discussing the habitat, we saw two people haplessly wander into the breeding ground and get dive-bombed by the birds defending their territory. It was a perfect example of this type of protective, territorial behavior. The people ran for cover; I think they were probably totally innocent and didn’t realize where they were. 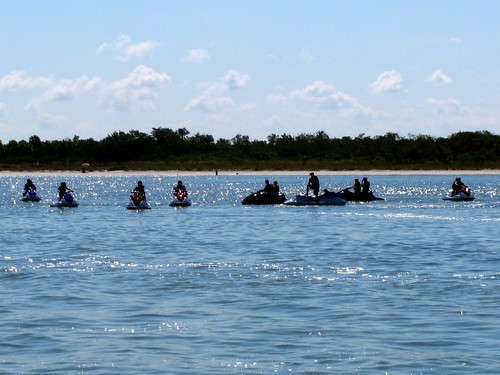 JET-SKIERS ON TOUR IN BIG CARLOS PASS
We could hear the leader of this tour speaking to the group; they might have been eco-tourists too, just like us. It’s actually fortunate that we took this ride in June. During “season” here in Southwest Florida, these waters would have been pretty well jammed with all sorts of recreationists. 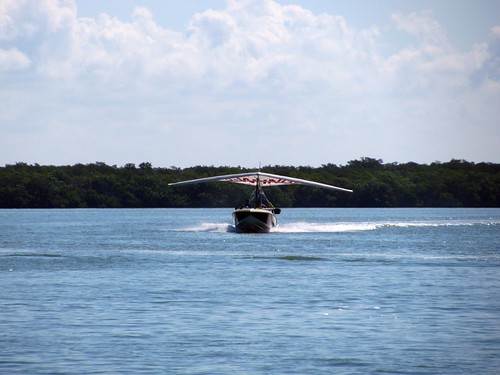 FLYING IN ESTERO BAY ?!?!?!!?
No sooner had we taken leave of the jet skiers and headed out of Big Carlos Pass then we saw this … I’m not sure what it is but it looks like fun! It’s a regular water sports and recreational paradise down here in Southwest Florida. 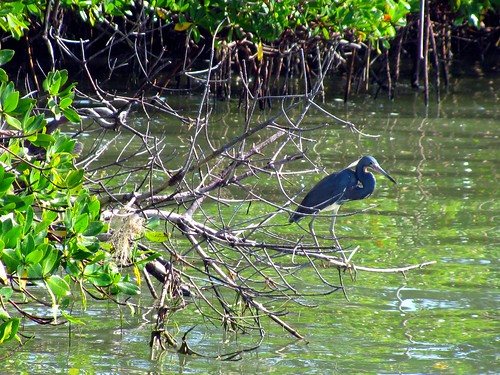 TRI-COLORED HERON
I believe we are now heading into what our intrepid boat captains referred to as “Spoon Lagoon”, the location of which we swore never to reveal. I’d tell you, but then I’d have to kill you…. It’s called “Spoon Lagoon” for reasons that will become obvious soon. This is a tricolored heron. You might be thinking, “Hey wait a minute, didn’t she just tell us that kind of bird was a little blue heron?”. Nope, I didn’t. See the white underbelly? Not a little blue! 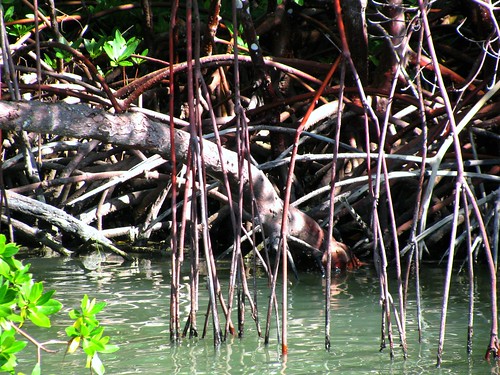 RED MANGROVE ROOTS
Here’s a sight I love, although I haven’t quite figured out why yet. This tangled mess is actually a the prop root system of the red mangrove tree. It’s a vast and intricate network, like a very complicated work of architecture or sculpture. I just get lost looking at it, and not unpleasantly so. Well, as it turns out, the prop roots ARE somewhat of an architectural feature. They serve as braces for the tree, to hold it up. They also collect and hold sand and silt, so an island forms under and around the mangrove. Finally, they pipe air down to the actual roots of the tree. Pretty useful, huh? 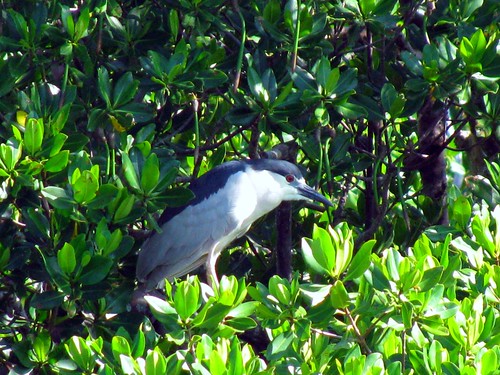 BLACK-CROWNED NIGHT HERON
I feel a little sorry for this bird. It doesn’t have any neck to speak of, and it must feel a bit dowdy as compared to the other, more graceful-necked herons. This was the first time I’d seen the black-crowned variety; I’ve had a close encounter with a yellow-crowned night heron before, years ago in Ding Darling. It was doing yoga and smiling at me. Good times, good times 😉 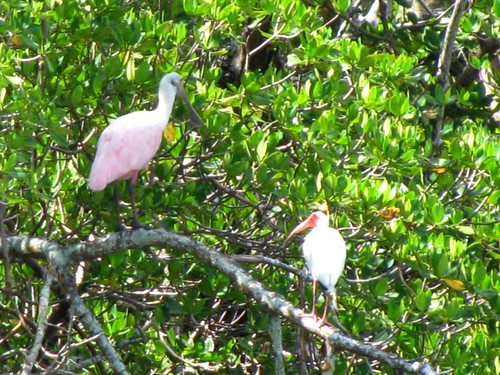 ROSEATE SPOONBILL and WHITE IBIS
And now we come to the rhyme and reason of naming “Spoon Lagoon” – it’s the roseate spoonbill, which our captain has known to hang out in this particular spot in the bay. Along with our spoony friend is a white ibis.

The spoonbill uses it’s bill to sweep along the mud for delectable morsels to nom-nom-nom, while the ibis has a bill more appropriate for probing down into the mud.

One of the things this class is teaching me is that my camera is woefully inadequate for these purposes. Perhaps Santa Claus will do something about that… 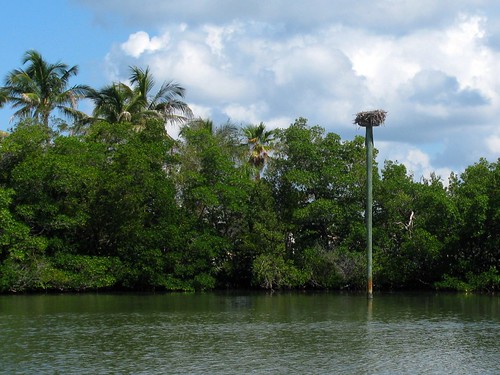 THE NESTING POLE
Sights such as this one are common in Florida. As habitat is lost, the osprey often improvise, as we have seen previously with the nest on top of a channel marker sign. They are also frequently given a perch like this one. You see these platforms a lot along a certain stretch of the I-4 interstate, where the birds had been building on poles close to dangerous power lines. The chicks would fall out and fry themselves. Conservation groups come along and build these platforms to encourage a safer location for the nests. I’ve also seen these man-made perches back home on Long Island, specifically in the area of the Connetquot River in Oakdale, NY. It’s kind of cool – like building a bird house, only open-air. 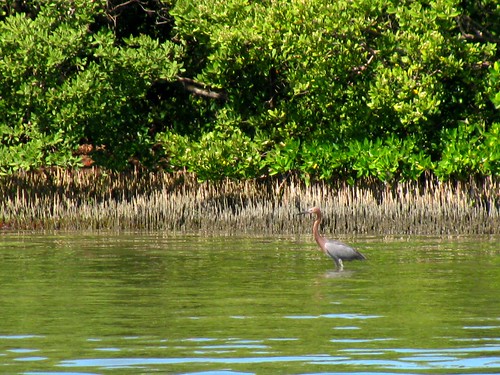 REDDISH EGRET
This reddish egret’s head nearly blends in with the reeds from far away. We recognized him by his lively hunting technique – he flaps and hops and jumps, chasing his prey all over the shallows. We enjoyed watching his antics 🙂 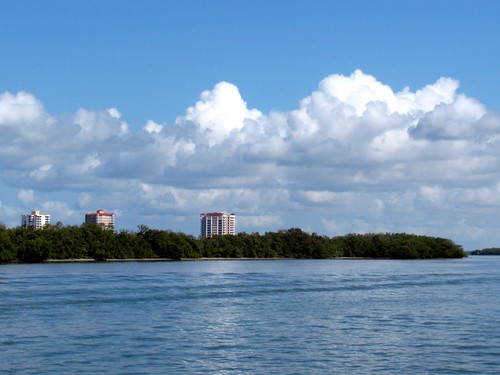 I am in love with the Southwest Florida sky. Clouds are endlessly fascinating to watch as they morph and change before your eyes. I am so lucky to live here, and I know it. 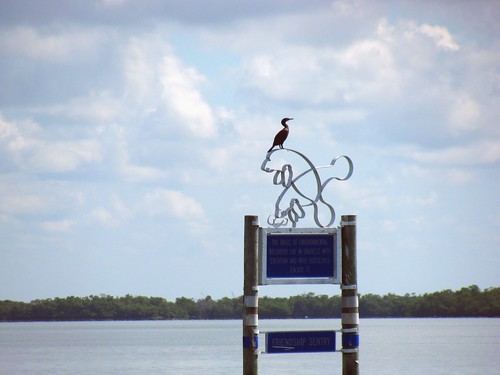 THE FRIENDSHIP SENTRY ON ESTERO BAY
Our friend the cormorant strikes a regal pose atop the manatee sculpture that sits on a sign,which says: “The basis of environmental recovery lay in oneness with creation and with ourselves. Enjoy it.” The sign below it says, “Friendship Sentry”. I guess the cormorant is taking his job seriously!

This pretty much concludes the Estero Bay field trip. It was a wonderful excursion, a great way to spend a Saturday morning, and I highly recommend my classmates and boat captains for this trip, Good Time Charters. They are knowledgeable, skilled and generous tour leaders and no, they didn’t pay me to say this LOL 😉 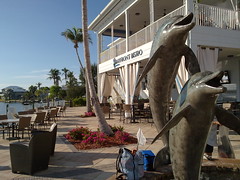 On June 18th 2011, my Coastal Systems Module class in the Florida Master Naturalist program embarked upon their second field trip. This time, we started from Snook Bight Marina on Fort Myers Beach and hopped aboard a sturdy vessel as the guests of Good Time Charters. We were fortunate to have Captain Mike, Captain Cristina and Captain Dwight all in our class, and found them to be excellent and knowledgeable guides for our “three hour tour… a three hour tour….” We had a beautiful sunshiny day for this adventure and the wildlife did not disappoint. There was some speculation that Captain Mike paid them all to show up 😉 Well, if that’s true then it only serves to prove what clever wildlife tour guides those people at Good Time Charters really are!

Estero Bay Aquatic Preserve is the first aquatic preserve designated in the state of Florida (1966). The bay is extremely productive and contains elements of historic (and even pre-historic) significance, some of them submerged. A wide diversity of marine life starts out in the grass beds “nursery”. The environment is also ideal for rookeries, colonies of nesting birds who breed and raise their young on the many islands that dot the bay. Here are a few of the critters we managed to encounter on this adventure. 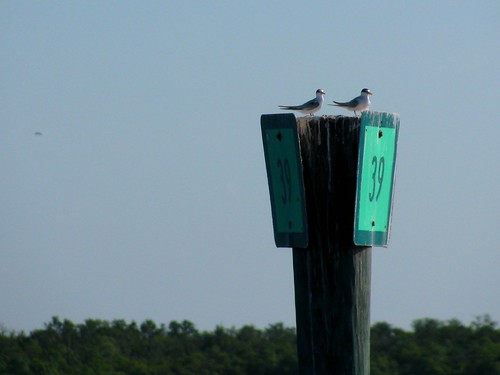 LEAST TERNS
Least terns are picky about who hangs around their nests. If you walk through their nesting area, they will dive-bomb your head. We would witness this phenomenon later in the trip near Big Carlos Pass. 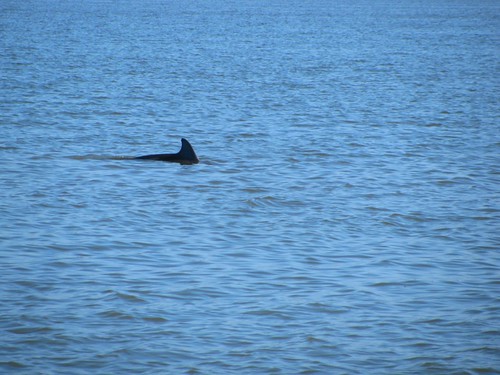 BOTTLENOSE DOLPHIN
Hard to catch these guys in action; you see them, get the camera on the spot where they WERE and they have already submerged, only to resurface somewhere your focus ISN’T. One of my many field guide books calls them “toothed whales” – as opposed to baleen whales, who have food filters instead of teeth. 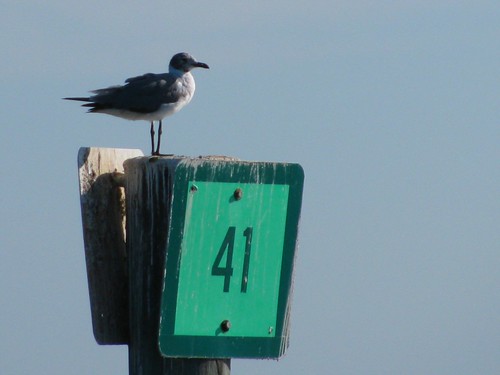 WILSON’S PLOVER (maybe…)
I think this might be a Wilson’s Plover but I can’t be sure because I cannot really see what color the legs are; if they are tan, then it is probably Wilson’s. They like to eat fiddler crabs. 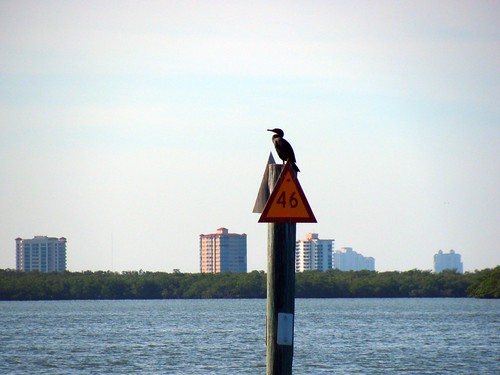 DOUBLE-BREASTED CORMORANT
The way to tell a cormorant from an anhinga is to examine the beak. Does it look like it’s good for spearing, or for tearing? This guy, looking very statuesque, has a hooked beak, so it’s good for tearing – and that means he is a cormorant. 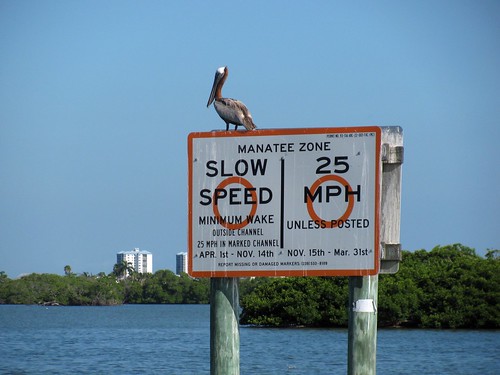 BROWN PELICAN and SLOW DOWN!
A brown pelican in breeding plumage (note the chestnut brown on the neck) stands sentry over the low wake zone. I read in the news this week that there’s a certain budding political party objecting to low wake zones, claiming that they elevate wildlife over people. I can only roll my eyes at such arrogant, self-centered ignorance. 🙄 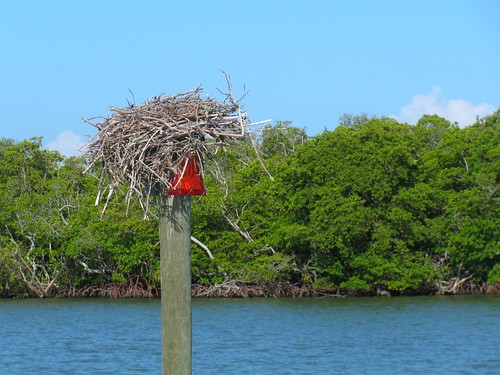 OSPREY NEST, IMPROVISED
Adaptive behavior – in the absence of tall trees, osprey will commonly build their nests on man-made structures such as light poles, tall buildings and yes, channel markers like this one. Saw lots of this type of adaptation in Rookery Bay too. 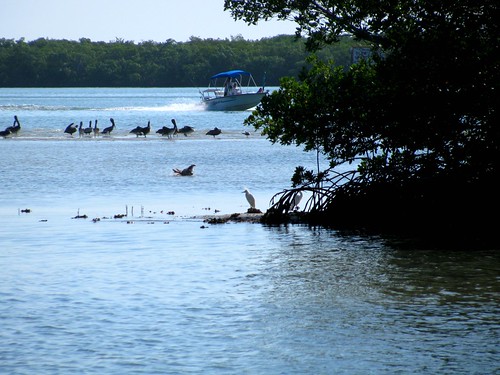 BIRDING and RESPECTING THEIR SPACE
While observing wildlife, always remember to maintain a respectful distance. You don’t want to get close enough to interrupt their natural behaviors. Another good reason to keep your distance – if you’re in a boat, you risk running aground! We were advised that if you fall overboard in Estero Bay, the first thing you should do to save yourself is… stand up! It’s only a couple-three feet deep out there, which is part of what makes it a great breeding ground. Those are brown pelicans on the far sandbar, an osprey flapping around taking a bath in the middle, and an egret (can’t tell which – from the “fuzzy” head, I’ll guess snowy egret) hanging out in the foreground. I see another egret behind the prop roots, too – looks taller, my vote is great egret. 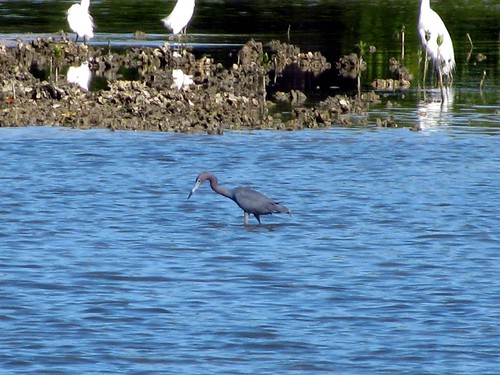 LITTLE BLUE HERON
The class on the boat spent a bit of time trying to identify this bird from afar. Sometimes the colors can be deceptive in light reflected off the water. In the end, we determined via binoculars, zoom lenses and getting a bit closer that he was indeed a little blue heron. 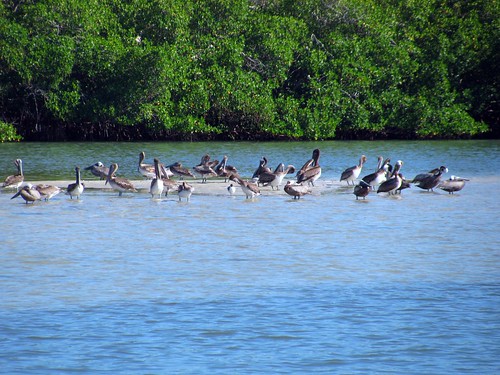 FLOCK O’ PELICANS
Here’s a closer look at the flock of brown pelicans at rest on a sand bar. 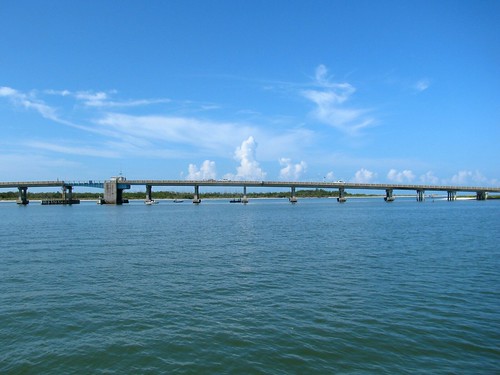 BIG CARLOS PASS and THE PARADE OF CLOUDS
We’re out of the no wake zone now and speeding toward the bridge that spans Big Carlos Pass. I fell in love with that line of cloud formations. They look like they are marching over the bridge toward Bonita 😉


Just under a minute of some cruising on the bay – feel the wind in your hair! 🙂


Have Signal, Will Blog! Mobile/photo blogging the Florida lifestyle and vacations