As the sun sets beside the Swan resort, I sit on our balcony and contemplate what to do with my evening. I passed on Party For The Senses because I just can’t do two days in a row of bad-for-you food. But I do need to drink to a friend’s birthday so I will probably venture forth one more time before the evening is through. Notice anything "off" about this picture? I am guessing that the wind was sending water everywhere, so they shut off the massive fountain at the Dolphin resort. We switched rooms at the Boardwalk and now we have an even more amazing view. The kids are doing homework. It’s a bit nippy and windy out today. I think it is an Animal Kingdom day! 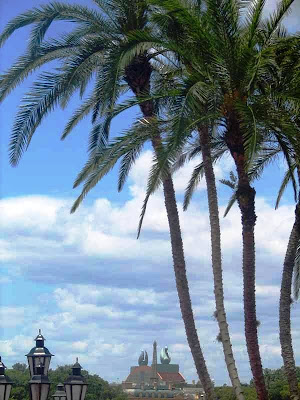 Swayin’ Over The Swan
EPCOT, Walt Disney World
Orlando, Florida
May 27th, 2008
It is hotter than the hinges of Hell in Walt Disney World Orlando today! I know that the Weather Bug is saying it is only 84*, but trust me, when you are walking around the parks and the sun is beating down on you, it’s an inferno.

Yesterday it was raining in fits and starts. As I was walking on the Boardwalk from the Swan to EPCOT, the sun came out again and the rain was rising from the Boardwalk as steam. It was downright weird to see people walking through mist in full sunshine. :blink: I tried to get some video of it but it wasn’t particularly visible.

So we only did a few things before deciding that the crowds and the heat were making it not-so-fun. We’ve come back to the Swan to cool off – I’m here in the room, Bro is in his room having a nappie-poo, and SIL and Nieceling are down at the pool cooling off.

We saw the otters! They were active and fun, and I got some video, which I’m busy uploading to YouTube and will post a link soon.

Have I ever mentioned how much I love the otters? 😀 Yeah, I know – I’ve been pretty Blah-Blah talkative about them, haven’t I?

We’re going to rest up and then have dinner… somewhere! I think we were originally going to the Rainforest at Animal Kingdom, but since we ended up leaving there early, I’m not sure if we intend to go back there this evening or not. I hear the Magic Kingdom is open till 2:00 am…. 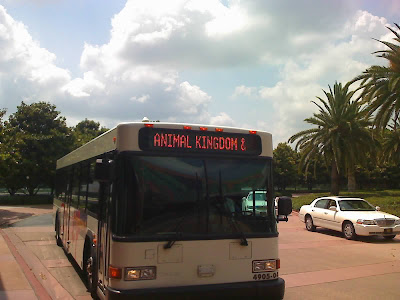 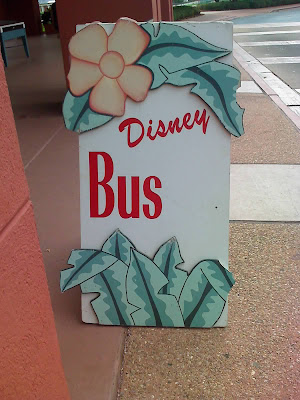 Well, I gotta tell ya – I’ve been busy! I did set up photos to post all by themselves all week. Hope you all enjoyed them.

I spent most of the week in Columbus, Ohio on business. Then I came home and fell asleep on the sofa on Thursday night. Friday was about a 13 hour work day, after which I dumped the worn clothes out of my suitcase and dumped in some fresh ones.

This morning, I’m just now having coffee before I jump into the shower and then get on the road for the three hour car trip to Orlando. Chez Bro and da fambly are already there. We’re all staying at the Swan. SIL tells me that they are facing the Animal Kingdom, and she sees Everest and the Tree of Life from her balcony!

So, I will be there for four days, during which time I hope to send lots of photos of the Flower and Garden Festival at EPCOT here to the blog. I have to remember not to get carried away, because then Blogger will identify me as a spammer and put a 24 hour captcha requirement on the blog – which I cannot fulfill from my phone, so there will be no more pictures that day if they do that!

OK, this isn’t getting me showered, dressed, and on the road.

The Dolphin Has A Halo, Part II
taken from EPCOT
Walt Disney World, Orlando, Florida
Here’s a closer view of yesterday’s shot. Left to right: “Morocco”, The Swan hotel, “France” (Eiffel Tower model), and The Dolphin hotel.
Even though the pretty tree branch “frame” is gone, we can now see the buildings in starker contrast against the sunset colors of the sky. What’s interesting to note is that The Walt Disney World Swan and Dolphin resorts are actually a lot further away than the other buildings, but because everything is in silhouette, you lose a dimension and therefore the sense of distance between the photographer and the buildings – and even the sense of distance between the buildings themselves. In fact, in this photo The Dolphin actually looks closer than France, but the reverse is true. It’s just that The Dolphin is a much bigger structure than the tower, so even though it is further away, it looks closer! 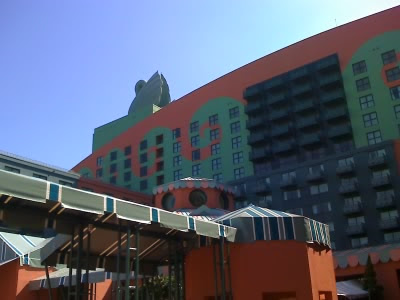 Now that I look at it, there aren’t a whole lot of balcony rooms at the Swan, are there? Maybe they reserve them for Starwood guests? Anyhow, the striped awnings are new. Maintenance was in the act of finishing up the installation over by the Dolphin while we were there. 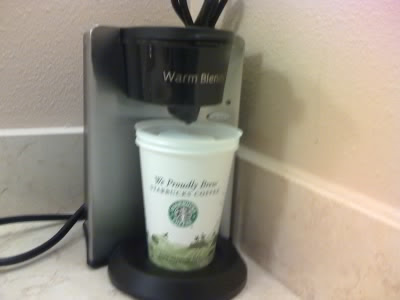 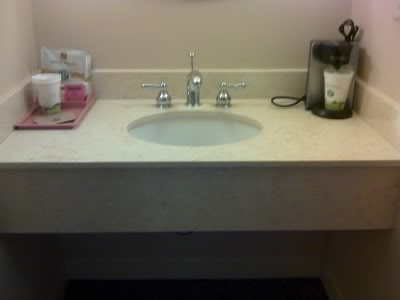 There was one INSIDE the bathroom as well. I like this setup. 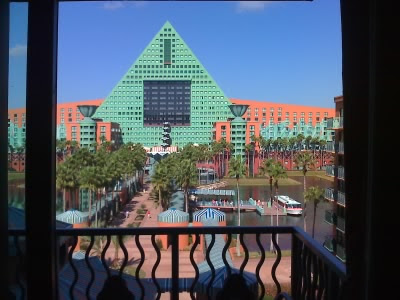 Amazingly, we were able to check in right away. There was a small housekeeping cart in our room, but we just wheeled it into the hallway and proceeded on in. Here’s our view from the balcony – pretty much exactly opposite the Dolphin. 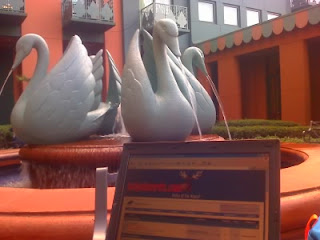 Lodging at the swan! 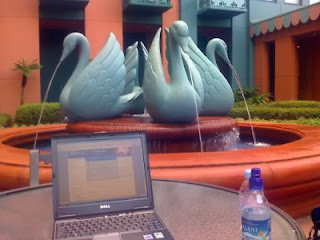 Working in a courtyard