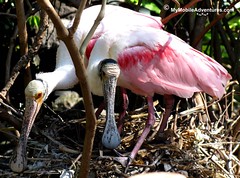 🙂 One morning this past March, I found a pair of roseate spoonbills in the Oasis at Disney’s Animal Kingdom. As I pointed my camera at them, they regarded me with their red-rimmed eyes as though a bit suspicious of the hunk of hardware in my hand (Canon SX110 IS). Today I decided to try and find out a bit more about them, so here are my Top 5 FUNky Facts About The Roseate Spoonbill: 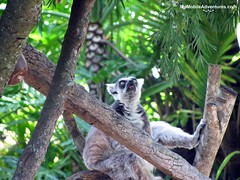 🙂 Ring-tailed lemurs can be found in Disney’s Animal Kingdom, pretty close to the entrance to It’s Tough To Be A Bug. I enjoy watching these guys. To me, they look like an odd mixture between a fox (pointy face), a raccoon (rings on the tail) and a spider monkey (general shape of body). I’ve done some reading about them and here are the FUNky facts I’ve discovered

1) Ring-tailed lemurs are in fact primates, so they are related to all sorts of monkeys as well as to humans. However, they are not of the simian order of primate; they are what’s known as Strepsirrhine primates, typically regarded as less intelligent than simians (although, that has recently been debated). There are several different kinds of lemur, and all of them hail from Madagascar. 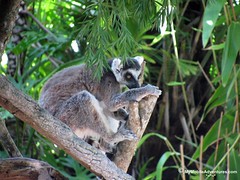 2) Ring-tailed lemurs like to sunbathe, and are often found doing so sitting up in the Lotus position. The sunbathing is to warm themselves during the day, but at night they sleep all piled up with one another to share warmth. Such a sleeping pile is called a “lemur ball”. They are usually found moving about on all-fours (quadrupedal), but are also capable of standing on hind legs for short periods. Whenever I’ve seen one walking around, they’ve usually sort of stalked along, similar to a cat or a raccoon.

3) While most lemurs are nocturnal, the ring-tailed lemur is dirunal – like (most!) humans, they are awake during the day and asleep at night. They are very social and live together in troops of about 30. The most lemurs I’ve seen at Disney is two, and I often wonder if they miss living in a big troop, and what Disney does for them to help compensate for socializing with the troop. I hope to remember to ask around next time I’m there. 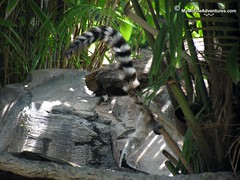 4) Ring-tailed lemur troops are female-dominant. This is true of all types of lemurs. The hierarchy of females in the troop is not inherited; you don’t get to be the top mama lemur just because your mother was.

5) Lemurs have scent glands that they use to mark territory, and sometimes they even have stink fights with other lemurs. They soak their tails in “stink” from their scent glands and wave them at the opponent. I have to admit that I giggled when I read this. In my head, I heard the voice of the French soldiers in Monty Python and the Holy Grail – “Hah, I stink in your general direction!” 😀 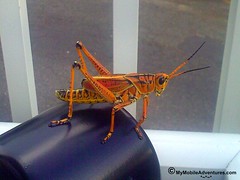 I mobile-blogged a slightly cloudy version of this photo a couple of weeks ago. My niece and I encountered this lubber grasshopper while on line to see the premiere of Harry Potter and the Half-Blood Prince. I’ve done a little research and found out some FUNky facts about lubber grasshoppers.

1) RANGE: You might have seen one of these critters while vacationing at Walt Disney World or elsewhere in Florida. In fact, the range of this extraordinary creature, so lobster-like in appearance, extends across the southeastern United states from North Carolina to Texas.

2) GROUNDED: Even though lubber grasshoppers have wings, they cannot fly. To get around, they jump or crawl. This one was crawling rather pathetically up and down the cigarette butt receptacle outside the movie theater. It felt around before taking a step, so much so that I thought lubber grasshoppers might be blind. However, I’ve found no evidence suggesting sight issues, so I guess maybe they are just very careful crawlers.

3) COSTUME CHANGES: Lubber grasshoppers go through several colorful stages; this lobster color is representative of an adult in a light colored phase. Other phases can include stripes, green, yellow and deep navy blue. They don’t just turn colors; they molt! Man, I wish I could find the shell of one that has molted. It would be cool to have because it would look pretty without actually being a creepy-crawly critter 😉

4) REPRODUCTION: Females lay their eggs in the summer time; the eggs hatch in the southern part of Florida in February, but wait until March over the rest of the lubber’s range.

5) MISCHIEF: The lubber has been known to cause significant damage to vegetable and citrus crops. The best way to control lubbers is to remove their habitat – they like dense vegetation in moist areas, so if swales and roadsides are kept clear of vegetation, the lubbers will move on to denser pastures and not migrate over to chow down on your orange trees. 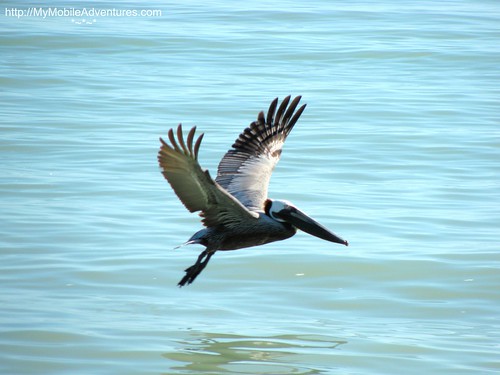 1. Pelicans have been around for about 40 million years, the earliest form of pelican having been found fossilized in France

2. The male of the pelican species pitches in to help incubate the eggs, much like a penguin does.

3. There are various legends in various cultures that would have the pelican either nourishing or resurrecting her young with her own blood

4. The pelican is the state bird of Louisianna

5. Pelicans may have been worshipped in ancient Peru; they are depicted in a lot of Peruvian art

NOT FOR THE FAINT OF HEART – a bystander captured video footage of a white pelican in St James Park, England swallowing a pigeon whole and live! The footage shows the pigeon continuing to struggle inside the pelican for quite sometime. DON’T CLICK IF YOU DON’T WANT TO SEE!