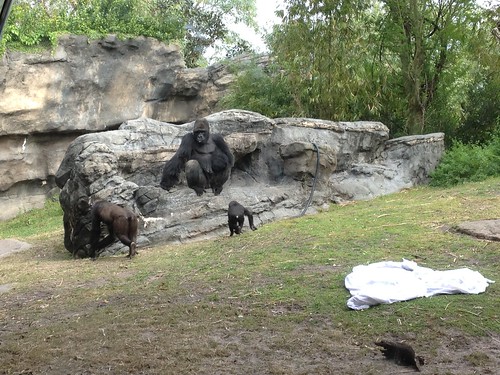 Lily, showing us her tail, originally uploaded by Erin *~*~*.

The baby girlilla frolics with her mom and dad; there’s an auntie nearby with a BIG tummy. Hmmm… 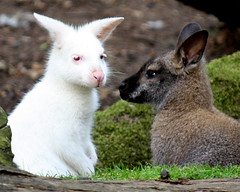 This is a great story that I first discovered on a blog called OMG, what IS that?. I love this blog because Alison can usually dig up some strange, off-beat animal stories. This one is no exception, so I went googling about it.

The Orlando Sentinel reports that a woman from Texas was visiting relatives in the Windemere, Florida area. They live on a street called Wonder Lane – I kid you not! She brought her pet, a 1-year old wallaby named JAK, and he escaped his harness and bounded away.

He’s been spotted here and there in the neighboring area. I’m wondering if anyone thought he was the Easter Bunny!
photo by Victius. Some rights reserved.

. I’ve found the DVD of the complete BBC series to be a worthy investment, and I’ve watched each episode several times. Naturally, I’ve studied the trailer for this next installment, and a lot of it looks familiar. Therefore, I’m more excited about the soundtrack! There’s some nifty background music going on in that trailer, and lacking a soundtrack disc available for purchase as yet, there’s some discussion and searching going on at the AdTunes forums (I haunt that place – TV commercial tunes are my new hobby). (aside: I would have LOVED to have been there when that HUGE whale jumped out of the water – you’ll see it at the end of the trailer!)
*~*~* *~*~* *~*~* *~*~* *~*~* 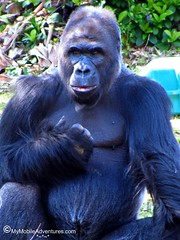 Well, I have been writing about ’em lately, haven’t I? 😉 Which is why this article in The Daily Disney caught my eye, I guess. I have to admit that it gives me a warm-fuzzy to know that useful research is conducted at Disney’s Animal Kingdom – useful not for the human race but for the animals themselves! The gorillas who live on the Pangani Trail in Harambe have been trained to cooperate in the taking of images of their hearts without the use of sedatives. This is useful because silverbacks are known to have heart problems later in life. Therefore, anything that can be learned without putting the animals through an unnecessary procedure is alright in my book! Oh and the other bonus of reading this article is that there are “related links” on the top right of the page. If you are a baby animal enthusiast, you will see lots to explore here.

This is a continuation of the story that began on March 19th 2010 with “Me and my girl-illa” Click the photos to see them larger in Flickr. 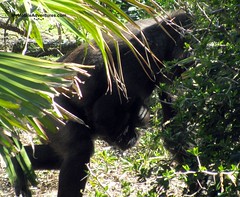 🙂 Hello again. Last time we met, I was busy sneaking around in the brush, trying to keep the prying lenses of the paparazzi away from my newborn baby girl-illa. There was a whole swarm of them, so I kept her pretty close to me (here you can only see the crown of her cute little head), creeping from one bush to the next, hoping to lose them. It’s not easy to elude the paparazzi; they’re a sly and resourceful bunch of stalkers, often working together to corner us, like dolphins herding schools of fish. I saw that on the BBC’s Planet Earth

series, which seems to have greatly contributed toward Disney’s own Earth (Disney Nature) 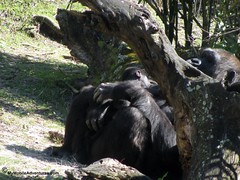 Finally, I found a nice fallen tree behind some bushes; it looked like a good place to lean back and rest from all the running to and fro, hither and yon, trying to find someplace, ANYPLACE to hide from the hordes. It was sunny and peaceful out there for a bit, and we both got some shut-eye. Well, I have one eye shut -the other one has to remain open at all times, just in case we’re invaded again. While we were snoozing, my mobile rang – it was Britney and Billy Ray, conference-calling with some advice on dealing with the whole publicity spotlight thing. Britney says that sometimes it’s better to bring the kid out into the open for a few minutes, under carefully controlled circumstances, of course, to make it seem like you’re friendly and cooperating. Billy Ray concurred that this tactic had worked with his darling Miley many times. 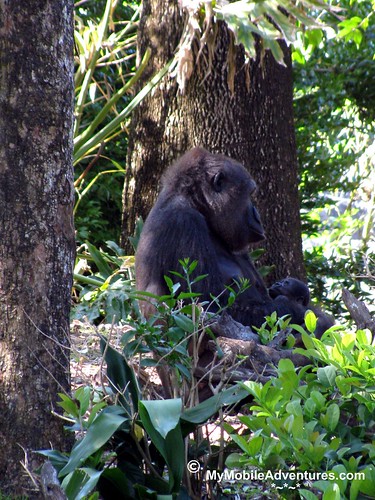 Well what’s a mama to do? I took her up on the hill, a safe distance from that herd of pests, and let them see her face. And wouldn’t you know, she turns out to be quite the little ham! She turned that sweet face up and gazed into my eyes and said, “I dunno who you are but I wuvs you!”. Couldn’t you just melt? 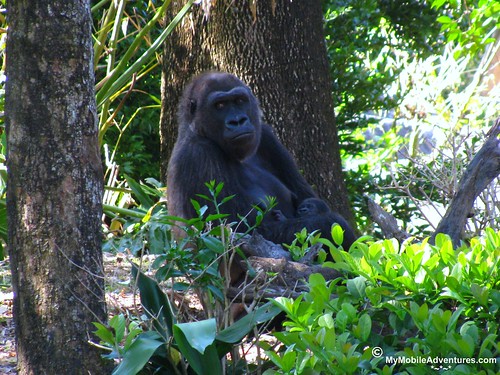 After a while, the paparazzi just started to annoy me. They yell directions, calling me by my first name like they’ve known me all my life, telling me to look this way, hold the baby higher, smile, turn your head, no the other way…. I tell you, this one guy was on my LAST nerve. Here I am giving him my best withering look. I think he was good and properly scared, as well he should be. These paparazzi dudes, they may be armed with a camera, but I’ve got THIS. 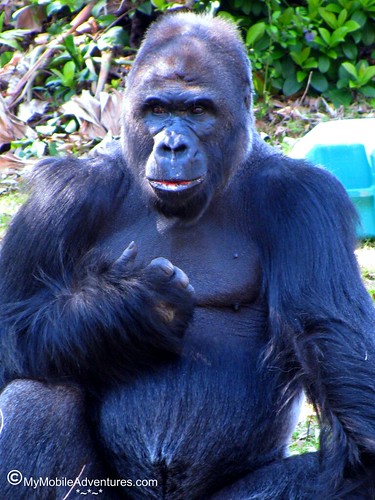 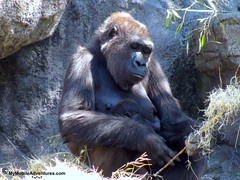 It’s not easy being the parent of a child star these days, especially when your child is a DISNEY star. We’ve been pretty much besieged ever since my darling little girl-illa was born. So much activity, so many people to see, so much of our lives played out in the spotlight. I tell you, sometimes I feel like we live in a zoo! Well, if you were paying attention during the late 90s/early 00s, you know that Disney’s Animal Kingdom is “nahtazoo”, but it still feels like one at times. On this particular day, the baby and I were just hangin’ out in the clearing up on that little hill in the forest, trying to take a little nap – but there were a lot of those noisy humans congregating on the bridge, and sleep wasn’t coming. 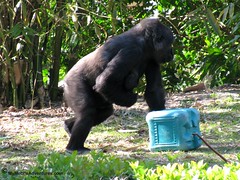 I think one of them was aggravating one of the boys across the ravine; a Cast Member had to go and put a stop to whatever shennanigans were going on over there. I decided it was too much for us to tolerate, so I thought of another resting spot and relocated. Clutching my little princess tightly to my chest with one hand (which makes me sort of lope along sideways on my other three limbs), I scrambled over the hill to a nice little rocky enclave where I’d stashed the baby’s pink receiving blanket. There we settled in, hoping to get a little rest. 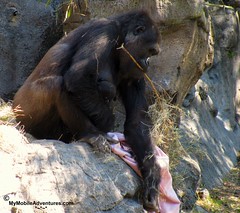 Well, we were both nearly asleep when those damned paparazzi figured out where we’d gotten to and descended en masse upon the glass enclosure! Ridiculous amounts of flash ensued – I mean, don’t these people read the manual when they buy these newfangled point-and-shoot cameras? If they did, they’d know we were too far away for the flash to help their pictures, but close enough for it to nearly blind us when we looked up. And I hate to be the one to tell them this, but you know all those pictures they thought they were getting of my child, the little girl-illa star? Well, I’ll just bet you that all those pictures turned out horrible – just blobs of light bouncing off the glass. Silly, silly humans!

By this time, I was just really grumpy – I mean, wouldn’t you be? All I wanted to do was catch a nap and see to it that my little princess was properly fed and rested. I am starting to rethink this Disney child star thing… maybe we should move far, far away and dye our hair and that sort of thing, live in disguise for a few years until all of this blows over. I honestly don’t understand what all the fuss is about. Children are born every day! There’s nothing extraordinary about that. I mean, if all those peoples with their cameras, ooo-ing and ahhh-ing all over the place think she is so special, they can just come on in and take a turn at changing her diaper! Then we’ll see what the definition of “special” is… anyway, I was done, I tell you – D-O-N-E, done! Carefully cradling my princess once more, I mustered all the dignity I could and stalked off into the brush to hide… 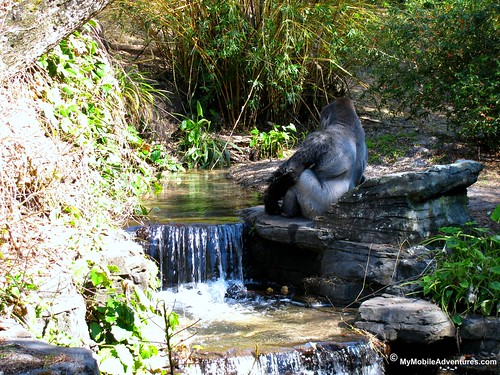 A gorilla on the “bachelor” side of the Pangani Forest in Disney’s Animal Kingdom decides to sulk and turns his back to the camera. Guests are instructed not to establish eye contact or gesture towards the male gorillas, as this can upset them. Someone broke the rules, and after a short period of agitated pacing, the gorilla decided to chill out next to the waterfall. 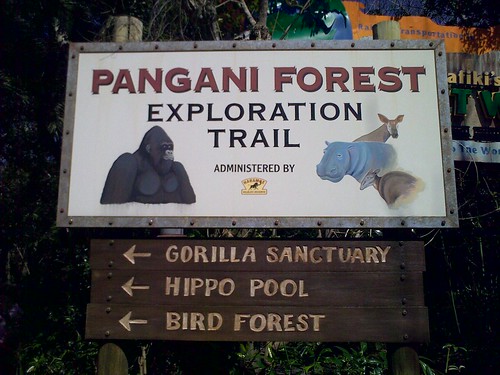 In search of gorillas at Disney’s Animal Kingdom, originally uploaded by Tink*~*~*.

We want to find the new little baby girl-illa 🙂 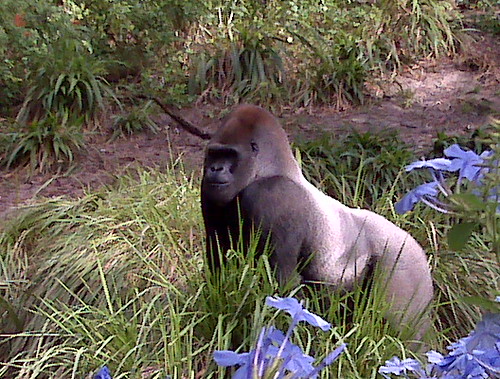 This one came climbing purposefully up out of the ravine and chased the other male one around a tree!!! They are now both chillin’ and refusing to look at each other. 🙂
Sent via BlackBerry by AT&T