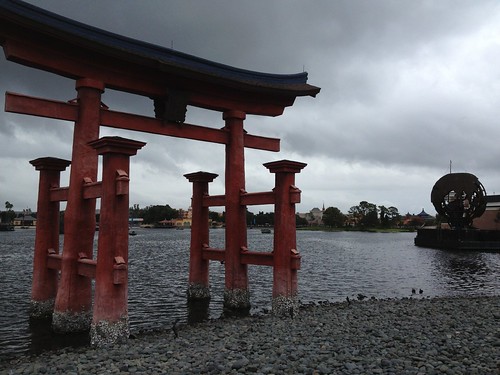 As symbolism goes, nothing in all of Disney World speaks to me quite as eloquently as the torri gate at EPCOT’s Japan. It marks the transition from the material world to the spiritual world. Today’s sky only adds to the ambiance. 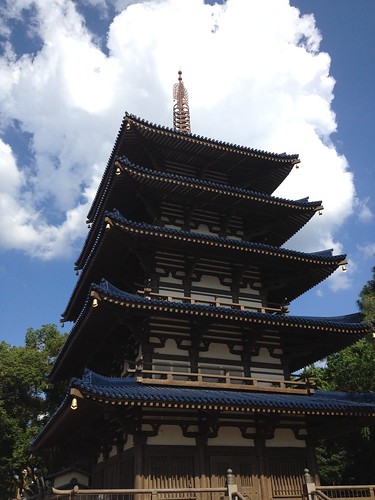 I can hear the Flower Power concert from here, originally uploaded by Erin *~*~*. 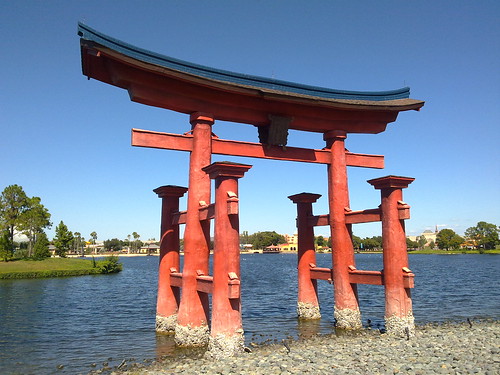 Still one of my favorite sights at EPCOT, originally uploaded by Erin *~*~*.

I still need to compose my thoughts about "flow" and the part that the torii gate plays in getting there. Fodder for a new blog (stay tuned…) 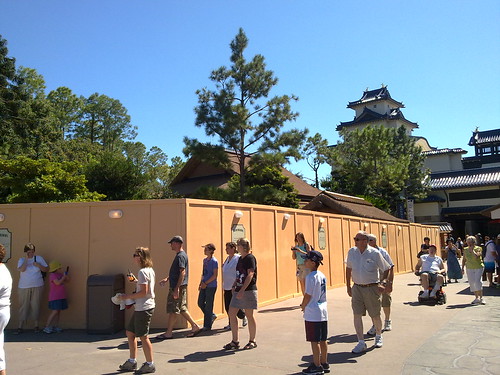 Disney picks the best times to refurbish (not), originally uploaded by Erin *~*~*.

Why does Disney choose festval time to refurb? So far, I am halfway around World Showcase and two countries (Japan and Cananda) are enshrined in walls of Walt quotations. Who makes these decisions, anyway? 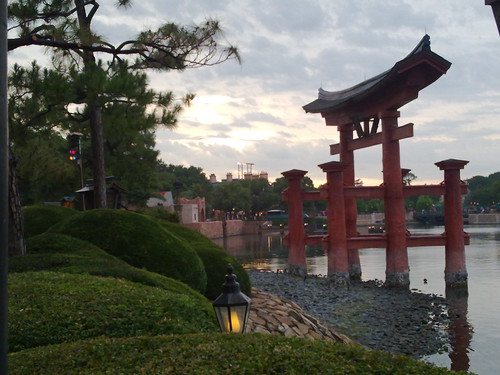 Our reward for getting drenched in Walt Disney World, originally uploaded by Erin *~*~*. 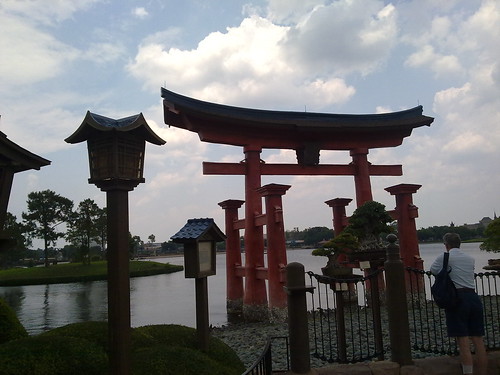 I admit a certain fascination with the whole concept of a gate that marks a sacred space and may even be a portal to worlds beyond…. 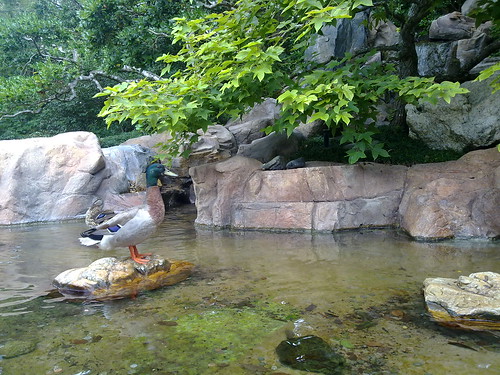 Hah! You thought that was what I ordered, didn’t you? Fooled ya 😉 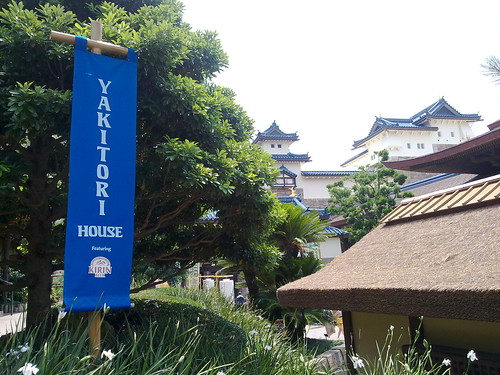 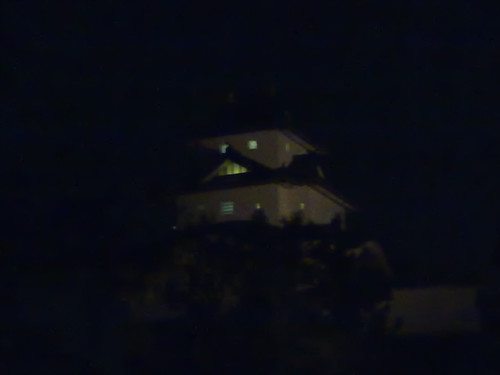 Never noticed before how angry the Japan pavilion looks at night 😉 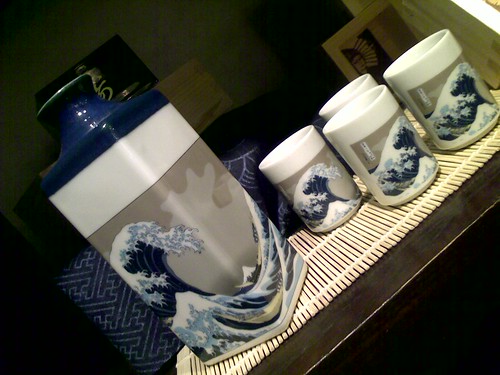 I’m told this pattern is from a famous Japanese painting from the 1800s. I think I need a huge copy of this for my livingroom because it will match my blue suede damnsofa 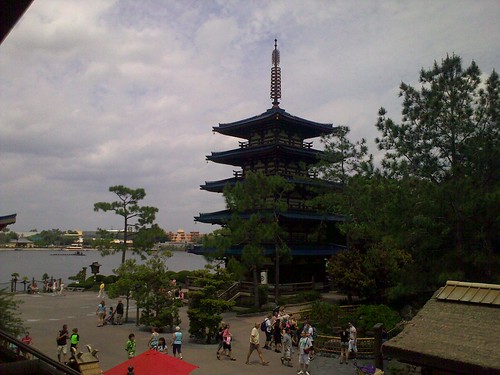 A friend just tweeted to let us know that there is severe weather and possibly a tornado headed this way. Sure is hot and humid. 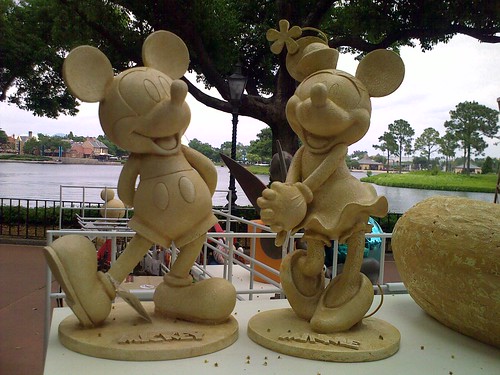 Garden statuary for sale just outside Japan in EPCOT, originally uploaded by Tink*~*~*. 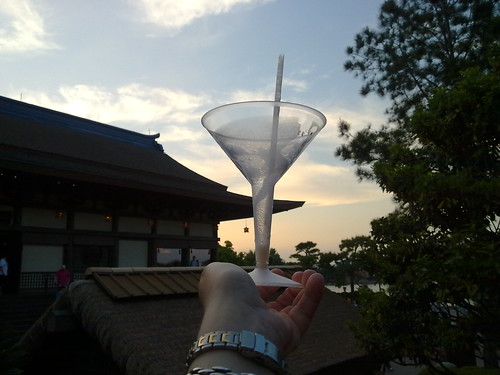 First dead soldier of the evening, originally uploaded by Tink*~*~*. 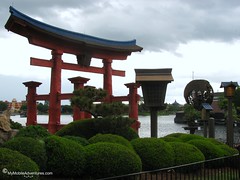 🙂 Torii gates are associated with the Shinto and (later on) the Buddhist traditions in Japan. The purpose of a torri gate is to serve as a gateway to a sacred space. This one stands by the lagoon EPCOT. I’m not sure which side of the torri is supposed to be the sacred side – it’s either the Japan pavilion itself, or else it’s the lagoon. I think it’s the water – here’s why.

The Shinto-Buddhist goddess known in Japan as Benzaiten is closely associated with the torri, and is often depicted wearing one on her head. Based upon the Hindu goddess Sarasvati, she is the goddess of “flow”; according to Wikipedia, that would include “water, words (and knowledge, by extension), speech, eloquence, and music”. I’d like to think it also includes the psychological definition of “flow” – to be so caught up in the task at hand, euphoria results. She is also associated with bestowing fortune.

Next time I’m in EPCOT, I need to look in the gift shop at the Japan pavilion and see if there is anything associated to Benzaiten in there. I want to read up on her – she sounds really interesting! 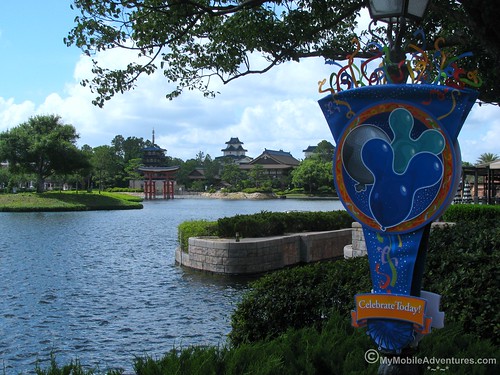 A festive “celebrate” banner helps to frame a scenic view of Disney’s EPCOT theme park. That’s “Japan” in the distance.

Are you going to Walt Disney World this year? I’m going in 16 more sleeps! Meeting my brother and sister-in-law there for his birthday/their anniversary. How many sleeps left for you? And when you get there – what will YOU celebrate? 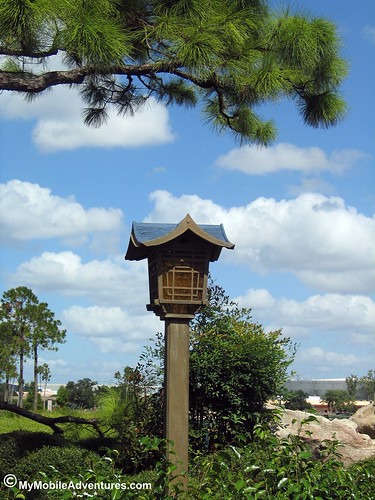 Lamp post in Japan
is secretly a speaker;
tuneful ambiance

I love the color palette, shapes and textures of the Japan pavilion in Walt Disney World’s EPCOT theme park. There are the slopes and angles of the blue pagoda-shaped roofs, the prickly puffs of needles on the pines (some of them are bonsai), and earthy brown tones sprinkled throughout. There are usually a few spots around the koi pond where you can grab some shade and rest a bit in these peaceful surroundings. 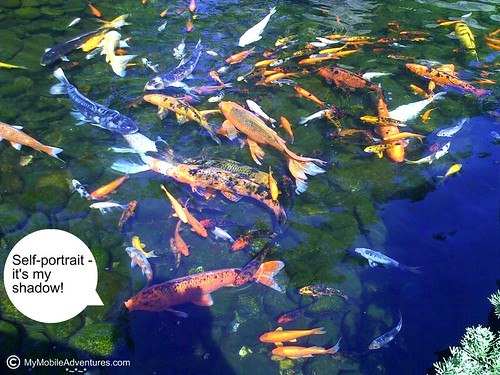 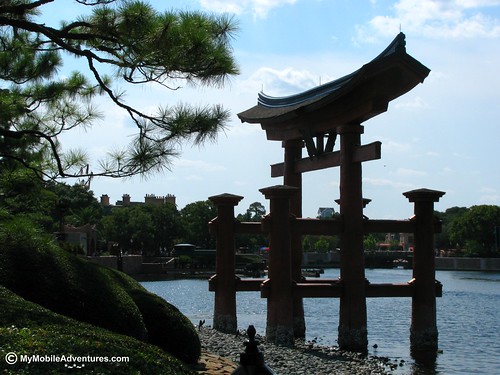 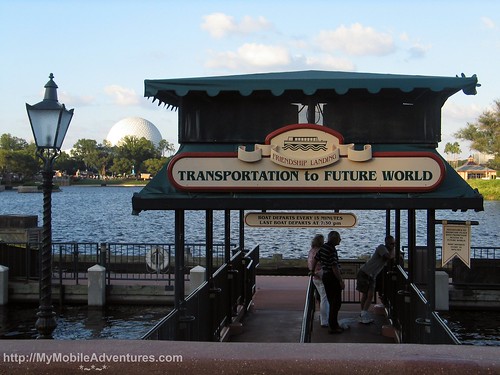 Can you believe it’s March already? At the end of the month, the first quarter of the new year will be over, and we won’t be able to call it “new” any more! We’re also that much closer to my next trip to Walt Disney World, which is coming up in May. Today being Ruby Tuesday, I thought we should take a look around the World Showcase at EPCOT and see what sort of red stuff we can find. It’s never too difficult to find red stuff at Walt Disney World. 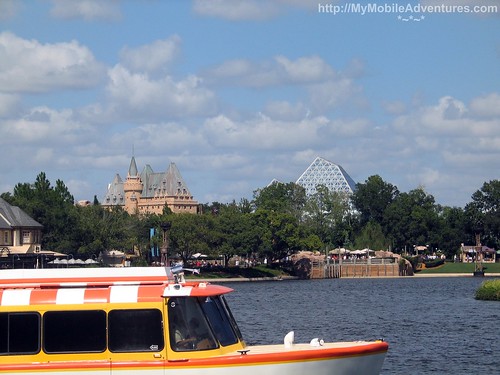 Why, here’s some red stuff now – check out the border around the signage for the Friendship boat dock. And here comes the boat – it’s got some red stuff on it, too. You know, I think I’ve only taken the Friendship boats across the lagoon maybe ONCE, but I’ve taken them lots of times to get back to the Swan or Dolphin hotels – “Swolphin”, for the initiated 😉 – late at night when I’m tired. 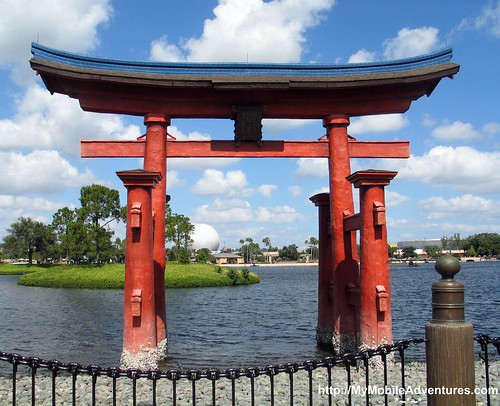 Here’s one of those pieces of architectural eye-candy. This red arch can be found at the China pavilion. Owing to the fact that you can position a photo so the Spaceship Earth geosphere, aka the big golf ball is visible through the arch, this is a very popular photo spot. However, I’ve not figured out how to take a photo here at night. After dark, the “golf ball” is lit up but there’s not enough light on the arch to make a complete picture. You either get the ball or the arch in focus and visible, but not both. I’m willing to take direction, so if anyone’s got any ideas, please comment!” 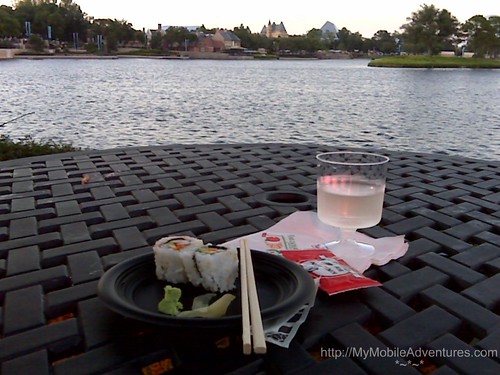 Well, the sun’s going down now, and I’m a little hungry. What say we stop in Japan for a little sushi and some sake? I normally don’t do sushi, but this is crab, so if I close my eyes I can pretend it is steamed and not raw 😉 As I recall, the sake was a little on the watery side, but I do like the way the red wrapper for the chopsticks is reflecting on the glass in the waning light of late afternoon. Kampai! (yeah, I googled – that’s like “Salut!”, only in Japanese).