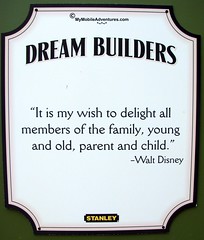 After dark, the dirty work at Disneyland begins

I never knew that Disney actually encourages the “wild” feral cat population that lives at Disneyland in Anaheim, California. Apparently, these cats serve a very special purpose… you’ll have to read the article to find out!

Long but worth it, this article touches upon one of the first things I learned about the making of Disneyland in Anaheim, California.

[pullquote]“When I started on Disneyland, my wife used to say, ‘But why do you want to build an amusement park? They’re so dirty.’ I told her that was just the point; mine wouldn’t be”. – Walt Disney[/pullquote]

I’d read a while back that Walt had taken his girls to an amusement park one day and it occurred to him that it could be cleaner, more child-friendly and more adult-friendly too. It could be a place that would appeal to everyone in the family, a place cut off from the real world, where guests could literally step into the story and really be there and interact with the characters. Walt decided that since the place he was thinking of didn’t exist, he would make it happen himself. “If you can dream it, you can do it,” he’s quoted as saying. “Always remember that this whole thing was started with a dream and a mouse.”

How I Stay At Disney World for FREE 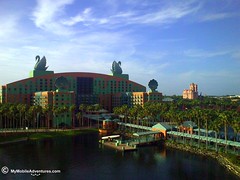 Walt Disney World Swan
– a Starwood Resort
(Tower of Terror
in background)
Every so often, a reader sends an inquiry asking how I can manage to go to Walt Disney World so frequently. “What do you do for a living?” they demand. “You must be rich!”. Well, no – but a girl can dream, so hold that happy thought 😀

Seriously – first of all, I live in Southwest Florida, three hours away from Walt Disney World by car. Three hours worth of gasoline, even in these challenging times, is a whole lot cheaper than airfare! But I think the thing that saves me the most money is that I haven’t actually paid to stay in a hotel at Disney World in a very long time. I use Starwood rewards points and stay for free. The only thing I pay for under the rewards program is hotel taxes and fees (and if I valet my car, I pay for that too). So, the last time I stayed at the Walt Disney World Swan, which is a 4-star hotel, I paid something ridiculous like $90 for three nights. No, not $90 per night – $90 for the whole THREE nights in a FOUR-STAR HOTEL. See? I told you it was ridiculous! 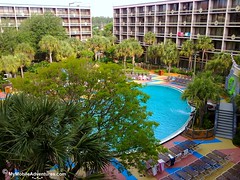 The credit card that gives me this rewards program is the Starwood American Express. I basically use it to pay for all of my expenses – cable bill, phone bill, gasoline, groceries – you name it, I pay it with Amex (believe me, if I could pay my mortgage with it, I would!). I pay off the card in full at the end of each month, so I never pay them any interest charges. I get one point for every dollar I put through the card. The year I moved down to Florida from New York, I racked up some serious points – you know how it goes with moving expenses. 10,000 points will get me a free night at the Swan or the Dolphin. About 3,700 points will get me a free night at the Sheraton Safari right outside Downtown Disney, or else at the Sheraton Suites in Tampa, just up the road from Busch Gardens, or else at the Sheraton Yankee Trader on the beach in Fort Lauderdale… well, you get the idea. 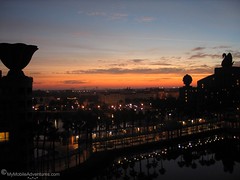 Sunset from the balcony
of the WDW Dolphin
– a Starwood resort

I just got a notice in the mail that says “Introduce your friends to the card…” – it says if I “invite a friend” and the friend is approved for the card, the friend (that’s YOU) will get a sign-on bonus of 10,000 points (hey, a free night at the Swolphin!) and I will get a 5,000 point bonus. The notice also says that the the first year’s American Express membership fee will be waived (My own current fee is $45 annually).

If you want me to “invite” you to apply for this card, you can use this secure form I’ve created (see CLICK HERE, below) for you to use to send me your email address. I promise not to sell it or to spam you – the only purpose is for Amex to be able to email your invitation to apply for the card. Good luck with the application – I hope you’re able to get the bonus points and enjoy the Starwood program as much as I’ve been enjoying it!

CLICK HERE to fill out the “Introduce A Friend” form… 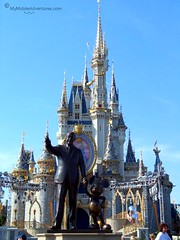 We’re on a roll with “Walt wisdom” this week. This article comes from an unusual source as it is not a Disney-dedicated site or publication. Walt Disney’s business acumen really boils down to a set of values and a unique approach to work. You might say Walt is the anti-Puritan when it comes to work. He never would have ended up in a “survival career” – he insisted on doing what he loved to do and getting paid for it. Good for you, Walt! This article is full of some of the better Walt quotes.

I recently found some of these very Walt Disney quotes decorating the temporary walls that had been erected around some construction at EPCOT and the Magic Kingdom. These signs were a delightfully welcome change from the typical “We’re Building The Future EPCOT for your enjoyment” (I saw just one of those). I took pictures of these inspirational messages while I was in the World in April. To accompany this article, I’ve made them into a little presentation using Flickr. Enjoy!

[Subscribers: if you do not see a FLICKR slide show just below this sentence, then click through to the blog HERE] 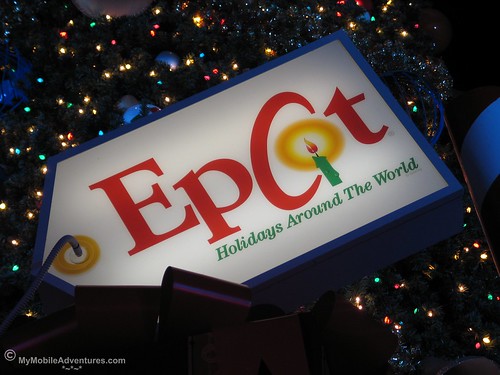 🙂 First one friend posted that he would be in Disney World mid-December and then another friend said she would be there, too. And then, yet another friend texted me last night to let me know there was a behind-the-scenes special on HGTV, all about decorating Disney World for Christmas. The sight of the sparkly, shimmery castle was too much for me. I hopped online, saw that I had enough points for two free nights at the Swan, and booked it before I could think twice.

Speaking of booking free nights at the Swan, someone wrote and asked me what that was all about. I do it through the Starwood American Express card. You can redeem the points for hotel stays. If anyone out there is interested in this card, please shoot me an email – BellTinkR at gmail dot com – so I can refer you!